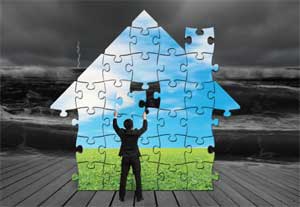 RICS: “Sales growth picks up speed as solid demand begins to filter through.”

LSL: “The most frequently paid property price across England and Wales is just £125,000.

Hometrack: “City level house price inflation is running at 8.3 per cent per annum, up from 6.6 per cent in May.”

Land Registry: “August data shows a monthly price increase of 0.5 per cent and the annual price change is now 4.2 per cent.”

KATE SAYS: “Property price inflation is reported to be between +3 per cent through to just under 9 per cent year on year depending on which index you look at. The higher rates are being applied to mortgage lending via Halifax and Hometrack’s City Index. But despite talks of affordability issues, LSL’s data shows that more houses are sold at £125,000 than any other price bracket – much, much lower than any average given by the indices, showing how much higher priced property and areas are ‘skewing’ the real costs of the average house versus average wages, making the latter comparison pretty redundant in today’s market.”

Asking prices in all lower priced northern regions fell – while those in expensive counties all had price rises.

Rightmove: “All four southern regions rose this month by an average of 1.3 per cent (asking prices). The average new seller asking price is higher in all of these regions than in any of the six northern regions. All the lower-priced northern regions fell, with an average decline of 0.9 per cent. The 15 most expensive counties have all had price rises this month. The average increase is 1.8 per cent, double the overall national average increase of 0.9 per cent this month. All of these counties are in the south. (Sept 15).”

Home.co.uk: “Price appreciation over the last 12 months in the northern regions was from -0.2 per cent to 1.4 per cent. Wales too shows little or no sign of market recovery, with a rise of just 1.4 per cent since September 2014. Over the last five years, only three regions surpassed the average growth – the South East and the East of England. The Midland regions and the South West house prices have merely kept pace with inflation over the same period. In the North, Wales and Scotland, the best performer, Scotland, is still dismal. During the last five years Scottish house prices have not increased more than one per cent per annum. (Sept 15).”

RICS: “National house prices continue to rise at a significant pace. All parts of the UK reported some degree of growth for the second straight month. East Anglia exhibits the sharpest house price inflation, with the West Midlands and Northern Ireland not far behind. (Sept 15).”

Nationwide: “The gap between London house prices and the rest of the UK continued to reach new highs. The price of a typical home in the capital (£443,399 on our measure) is more than double the UK aggregate. (Sept 15).”

LSL: “The southernmost regions in England are climbing back up the league table in terms of annual price change. The South East climbed two places to top of the league, at 5.8 per cent, pushing East Anglia and the East Midlands into second and third place respectively. Greater London, at 3.9 per cent, has also seen a rise in its relative position and is now in fifth place, up
from eighth position last month. (Sept 15).”

Hometrack: “At a city level the highest rate of growth is 11.2 per cent in Cambridge while the lowest Aberdeen at -2 per cent. Compared to a year ago, just five cities are registering a higher rate of annual growth led by Edinburgh and Glasgow. (Aug 15).”

KATE SAYS: “All the indices this month agree that certain areas such as those in the South are doing well price wise, but where wages are lower, population rises limited and less imbalance between demand and supply, there is very little happening. Prices are, in most areas, still rising at lower than their annual average (Land Registry) and what we are still looking for is whether rises in the ‘regions’ will ever see the 10-20 per cent uplift that those in the South has experienced.”

Rightmove: “Demand from those who can afford to buy remains high. Those who own property that is in most demand, either by type or location, are seeing their values continue to rise. Their properties are rich in features and benefits that others want to buy, as a consequence they are getting proportionately richer than either owners of less desirable homes or those who are not on the housing ladder at all. (Sept 15).”

Home.co.uk: “The key driver for demand is the availability of mortgage finance, which remains abundant. Talk of interest rate rises at the Bank of England has not dented buyers’ appetite. (Sept 15).”

NAEA: “On average, a total of 408 house hunters were recorded per NAEA member branch in August, a decrease of 12 per cent from July when 462 were recorded. Sales to first time buyers fell to the lowest level in over a year. (Aug 15).”

RICS: “New buyer enquiries improved for a sixth successive month. Within this, almost all parts of the UK are seeing rising demand with the pick-up particularly strong in the West Midlands, the North and Wales. (Sept 15).”

Agency Express: “East Anglia reported an increase of 12.3 per cent in properties ‘Sold’ marking the regions record best September since the index’s first records in 2007. Further up the coast, Yorkshire and Humberside had an increase in properties ‘Sold’ rising by 9.6 per cent, reporting the region’s largest rise in ‘Sold’ figures for five consecutive months. (Sept 15).”

LSL: “The strongest September for home sales since 2007. Monthly sales totaled 84,000, an increase of 3 per cent from August, making September only the second month this year in which sales have overtaken 2014 levels, with the cheaper northern regions experiencing the fastest growth in property sales, while a shortage of property stock on the market in the south is slowing activity. (Sept 15).”

KATE SAYS: “The data continues to show that where demand is high and stock is available, markets can get busier without seeing prices rise much, or at all, for example, in the case of the North West of England. With MMR biting at the start of the summer last year though, we would expect demand to start rising year on year, but the feedback from the indices shows a mixed picture suggesting volumes are actually down year on year over the summer whereas September appears to be picking up. We’ll need to see the October figures to know whether buyer demand is really picking up or whether it remains dampened due to the tightening rules on mortgages.”

Rightmove: “Suitable supply remains tight, with the number of properties coming to market down 6 per cent on the same period in 2014. The result is the biggest monthly price rise seen at this time of year for 13 years. (Sept 15).”

NAEA: “Available housing has had a large decrease this month, with 38 properties available per branch, compared to 55 in July, a decrease of 31 per cent and the lowest since January 2004. (Aug 15).”

RICS: “New instructions to sell dropped back yet again, meaning the number of new listings has now fallen in 13 of the previous 14 months. In an additional question, 40 per cent of respondents feel the biggest factor behind this ongoing shortage is the lack of stock for sale deterring would be movers. The next most cited influence was economic uncertainty, with 12 per cent stating this was holding back supply, while 11 per cent believed stretched affordability was the issue. (Sept 15).”

Agency Express: “Out of the 12 regions recorded by the Property Activity Index, 11 reported an increase in new listings For Sale. London and the South East dominated the market; the South East reported a month on month increase of 29 per cent and London an increase of 22.1 per cent. However, the Index also revealed that over a three month rolling period figures for the capital actually fell by -22.3 per cent. (Sept 15).”

KATE SAYS: “Although the summer activity shows the amount of new stock coming onto the market was horrendously low, Agency Express’s data suggests that it might have improved in September, meaning we may well see a good flurry of activity between now and the end of the year. The RICS research of their surveyors is insightful as it shows we are in a ‘catch 22’ with people not putting their homes onto the market because they cannot see anywhere to buy. In addition, the issue of economic uncertainty after the crash is clearly still affecting people’s desire to ‘leap’ into their next purchase, with affordability still on the agenda, but in third place. For future market success, it’s only new stock which can help to improve the property market’s prospects, relying on existing sales isn’t enough to drive future growth.”