But did they finish their challenge in time?

Strutt & Parker agents may be known for their upmarket house sales and lettings but such prime concerns were set aside recently by a group of employees to raise money for the Sebastian Coe Charitable Foundation, part of the company’s efforts this year to garner £200,000 for charities who support the Francis Crick Institute. It specialises in biomedical research. 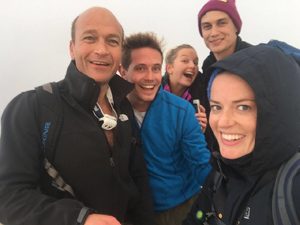 An intrepid group from the company completed the Three Peaks Challenge, which for non-walkers means climbing three of the highest peaks in the UK in under 24 hours including travel time. These are Ben Nevis in Scotland, Scafell Pike in Cumbria and Snowdon in Wales. 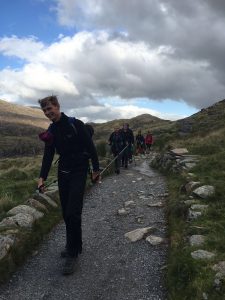 They set off on a Friday morning at 5.45am from Hammersmith for Ben Nevis where they faced driving rain, 85-mile-an-hour winds and fog for their first climb, aided by two mountain guides. Setting off at 6.38pm they reached the summit at 11pm, returning to the bus at 1am and then setting off for Scafell Pike.

They arrived there at 7.30am and, says Lucy Ball, “thankfully the weather in Cumbria was much better than Scotland. At 3,209 ft, Scafell Pike (pictured, below) was the smallest of the peaks we had to climb but arguably the hardest due to its steep incline, rocky path and boulder fields”.

After summiting at 9am they returned to the bus at 11.30am and sped off for Snowdonia but one of the team set off early up the mountain to ensure the group could say they had “done it” within the 24-hour widow.

“My colleague Andrew Scott had driven ahead to ensure an earlier start on Snowdon. In an astonishing display of fitness, he managed to ascend the 3,560 ft mountain by 5 pm and ran back down again by 6.25 pm, ensuring that we had nailed the challenge in the nick of time,” says Lucy.

“It was an unbelievable experience, quite literally full of highs and lows – and every minute of it was worth it for the money we have raised for the Sebastian Coe Foundation supporting Cancer Research.

If you would like to add to the money already raised by the Three Peaks Challenge team, then visit Lucy’ fund raising page.