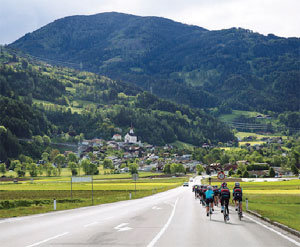 Fundraising charity Club Peloton has announced that registration for the Legal & General Real Assets pedElle 2017 is now open. Designed to bring together women in the property industry to network, ride and fundraise, the fifth edition of the event will take place 17th-21st May 2017.

Over three days, the cyclists will ride 500km from Porto to Lisbon, stopping over at the inland cities of Viseu and Leiria along the way. With beautiful scenery and a lot of climbing to contend with, the event presents a considerable challenge. The riders will be spurred on by their fundraising for Coram, the UK’s oldest and first children’s charity, and Club Peloton’s principal beneficiary. The money raised will go to Coram Adoption, which finds safe and loving homes for some of the UK’s most vulnerable children, including some who have suffered from abuse and neglect since birth.

PedElle is run as a group ride, with the cyclists – or peloton – riding together at the pace of the slowest rider to ensure that everyone finishes the ride together.

“We’re delighted to bring the Legal & General Real Assets pedElle to the beautiful roads of Europe once more,” said Nick Hanmer, Chief Executive of Club Peloton. “For those that have never cycled, pedElle is a fantastic opportunity to get on a bike and challenge yourself in the company of many other incredible women, all the while raising money for a fantastic cause.”