Sign in or Sign up
The essential site for residential agents
Home » Features » Can photo enhancing really help improve your Rightmove stats?
previous next
Marketing

Andrea Kirby delves into the technical world of photo enhancing to see what the tech can really do. 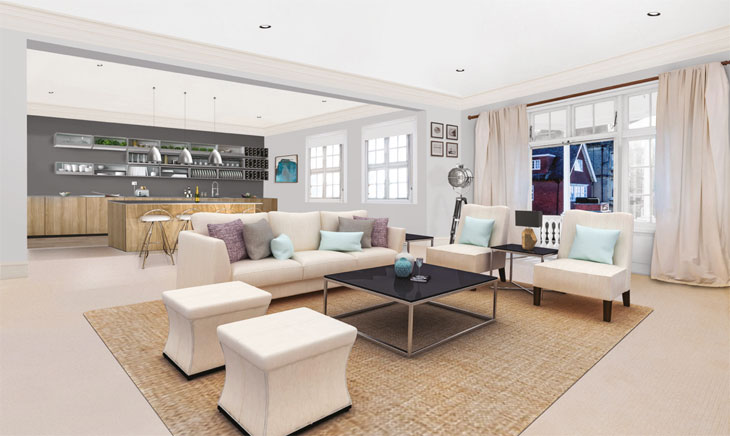 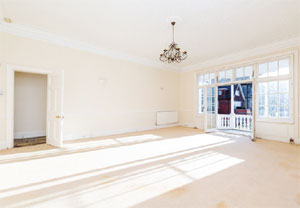 Before (above) and after virtual furnishing.

The quality of your photographs can make the difference between a quick sale and a property that sits in inventory for months.

KeyAgent, for example, claims one agent who used its photo-enhancing app PropertyBox, managed to boost their Rightmove stats by 15-20 per cent.

KeyAgent also points to research from AXA which shows that when people were asked to guess the value of a one bed flat, their estimates increased by 21 per cent once it had a photo makeover. Yet many agents are still doing the bare minimum – and their photos show it.

Meanwhile the world of photography has embraced technology and that means, as Tom Durrant of Doctor Photo says, “Things are moving on, and pretty quickly, as well.” Blending the virtual world with the real world is the big trend right now – not just showing houses as they are, but as how they will be, or could be. For instance, Doctor Photo carries out facelifts on photos that go beyond Photoshopping a bit more contrast or correcting the white balance; Tom calls it “our digital surgery service.”

That can mean decluttering, editing out cars parked in front of the house or wheelie bins that have been left on the kerb, or tidying up rental properties when the tenants have left them in a mess. Taking a car out can cost a fiver; money well spent if the photo gets a prospective buyer’s attention.

One of the fastest growing areas of Doctor Photo’s business is virtual furnishing. It’s not just standard CGI, Tom Durrant says, “It relies on the agent to take photos of the property, and then we’ll add virtually rendered furniture.” The agent can specify the style and Doctor Photo staff get a feel, over time, for what a particular agent likes, and what kind of design is appropriate to the market – Nordic minimalist or country house kitsch. 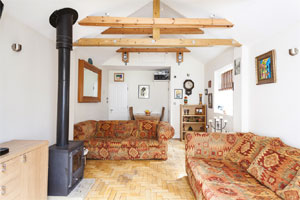 BEFORE: fairly frumpy, a tad tired…the millennials would move on –

Virtual furnishing “can give an idea of lifestyle, perspective, and scale,” he explains. If a property isn’t completed, or is empty, or has planning permission for an extension which hasn’t been started, Doctor Photo can show what could be there. Or different stylings can be shown to appeal to different buyers. “Many buyers have high expectations but perhaps not much imagination,” Tom Durrant says, and that’s where digital surgery can help. One agent used Doctor Photo to provide a shot of a rather dingy flat opened up, with the kitchen moved into the living room. On the back of this shot, they could sell it for £1.25m where the previous agent hadn’t managed to shift it. The commission on that would pay for an awful lot of photo editing. 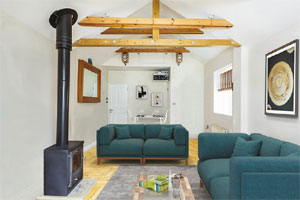 AFTER: the cleaned up version is so much smarter!

With new properties, advanced editing can clean up builders’ leftovers and paint the walls, and a virtual snagging service can round up the extra tiles that have been left in the bathroom. At £36 per image, it’s a useful service for new homes sales – and it doesn’t take long; it’s a next day service, so you can get the property on the market fast. (Basic photo editing can be done in as little as two hours.)

KeyAgent also likes Virtual Reality and points to the statistics; agents who are using it in their listings get 403 per cent more enquiries, 95 per cent more client calls, and 49 per cent more qualified leads. While KeyAgent’s well known for its editing app PropertyBox, version 2 of which launched in July last year, director Rolf Groenewold is really keen on VR, and the company has invested in Matterport’s 3D technology to offer virtual tours of properties. Groenewold points to the fact that with the vast majority of property searches now starting online, visual appeal has become more important than ever before, but also states that VR can also help improve conversion rates.

KEEPING UP WITH TRENDS

It’s disappointing, though, to see that other sectors are shooting ahead of the residential sector. Dulux has a ‘paint your walls’ app, Ikea Place lets you drop furnishings into your house, and the hospitality sector is investing huge amounts in VR for bars, hotels and conference centres. But it’s still a minority taste for estate agents, at least in the UK. 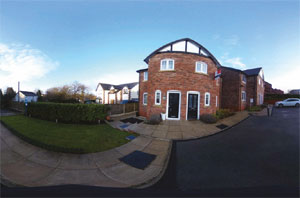 BEFORE: The original shot was dark and flat, unappealing

BoxBrownie.com is based in Australia, but its growth in the UK has given Peter Schravemade, Strategic Relationship Manager, an interesting experience. He thinks the UK is some way behind the US and Australia when it comes to property photography. “I would have fired Brad (his CEO, a professional photographer) if he’d taken those shots,” he says of some of the work he’s seen, though he admits “the floorplan culture in the UK is second to none.” Perhaps it’s not surprising that BoxBrownie is getting lots of work for basic edits and image enhancement (though no awards for tact). 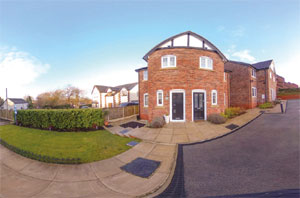 AFTER: a little amount of work shows the house at it’s best.

He says virtual staging is already massive in the US, as well as in the commercial property sector; based on that success, BoxBrownie will be extending their functionality to introduce virtual renovation in a couple of months. “If you can afford to stage a property, stage it,” he says, “but it’s quite expensive, so maybe the benefit is not worth the cost. Virtual staging is much cheaper and demonstrates to Joe Smith at home on his sofa just what that space does: is it a bedroom, is it a living room, and so on.” In Australia, he says, virtual staging generates more enquiries for agents than any other enhancement; twilight conversion edits also work well in both Australia and the US, getting four-to-six times more clicks than daylight shots.

In the UK, twilight shots haven’t taken off yet, but item removal is one of the most frequently requested edits. CGI renders are also doing well, particularly in new property.

CGI prices have come way down over the past five years. At the same time, quality has improved. “When we entered the market,” Peter Schravemade says, “ the best price for a CGI edit was three times what we can do now.” CGI has got faster, too, though it’s still not as quick as photography.

But then, he says, “When I started in property we were using film, and it took 76 hours to develop.” Now, properties can go on the market the same day, with professionally enhanced photos. He thinks property photography is heading towards the 360-degree photo. As with every area of technology, hardware prices have come down and the Ricoh Theta S camera which makes 360 views possible costs under £200.

Not only does 360 photography grab viewers’ attention, but viewers who view a property having seen a 360-degree shot are far more qualified than those who’ve just seen a still – so they’re more likely to make an offer. So, using 360 photography can reduce the time wasted on fruitless viewings. “If I ran a property management company, I’d be 360-ing every single property,” says Schravemade.

This is where property photography just might be changing the future of estate agency. Agents have always tried to get as many viewings as possible, but 360-degree photography means it’s a viable business model to try to get as close as possible to the magical number of one viewing, one offer. You can show a property to anyone, anywhere. You could turn your office into a cinema, or you could use a cinema in Shanghai to show properties in London to an audience of Chinese investors. You could show someone fifteen properties in an afternoon.

No wonder Peter Schravemade says, “Right now, we’ll make your digital marketing look amazing, but where we’re going is the cutting edge, somewhere else entirely. We’ll end up going towards full immersion; you’ll see the whole apartment, be able to walk around it, even hear and smell, maybe.”

And whether we get to the fully immersive environment in the next couple of years or not, it could be time for agents who still think that taking six shots on a smartphone is good enough for their marketing materials to wake up and smell the coffee!

Most photo editing providers see common disasters time and time again, but it only takes a small amount of thought and effort to improve your results dramatically. Sending a brief checklist to vendors suggesting morning-of-photo-shoot preparations can help, but you may need to do a little extra work to get the best shots. (BoxBrownie includes a full pre-photo checklist as well as other practical advice on its blog.)

If all else fails, remember you can always tidy up in Photoshop.