It's being marketed as an affordable solution to the UK housing crisis, but it'll probably end up being a posh garden room 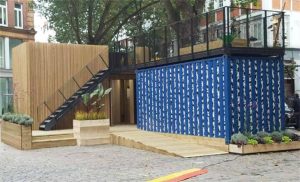 An agent in Brighton is marketing a very unusual solution to the UK housing crisis – a house made out of two shipping containers.

Oakley Homes is offering the one-bedroom house for £35,000 although purchasers will have to find their own site for the home, which was designed by award-winning architect Carl Turner for a recent London Design Festival event.

The house is a mixture of shipping containers, steel and timber and comprises a bedroom as well as a kitchen diner, with a terrace built across the top featuring a vegetable patch and built-in seating. It was installed at London’s The Building Centre between September and October last year as part of the annual London Design Festival and was a collaboration between Arup, Carl Turner Architects, CBMM and The Building Centre. 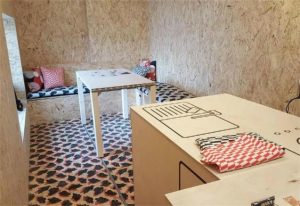 The focus of the project was to create a home that was affordable for Londoners by producing a home that cost approximately the average salary in London – £24,648 – and would fit into a small plot of land.

But the house did not go on to fulfil its potential. After appearing at the festival it was acquired by local property search agency Find and Build and is now in pieces in the garden of director James Oliver, awaiting a buyer.

James says he bought the property on Ebay with the intention of re-erecting it locally and then using it both as an office and a holiday rental property during the Summer but he’s decided to sell it on instead after realising it was “too smart” to be used as an office.

His agent, James Epps of Oakley Homes, says: “We’ve had loads of calls about this from first time buyers who want to take a look at it, but to be honest I think it’s going to end up being a home office or children’s fun room in someone’s back garden.

“There is a couple over there having a look at it at the moment for that purpose.”