Sign in or Sign up
The essential site for residential agents
Home » Charity » PICS: Property firm’s HUGE thank you for Remembrance Day event 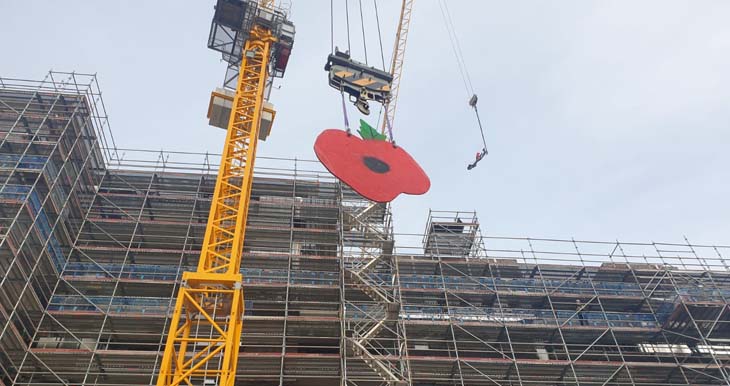 The annual Remembrance Day parades were cancelled or only thinly attended this year as Covid kept many people away from the traditional events.

But yesterday one property developer decided not to let the 11th hour of the 11th day of the 11th month pass without a special effort.

Those marking their respect near Bermondsey Square in East London will have seen a huge poppy hoisted skywards by a building site crane plus a large Help for Heroes flag held up by two other cranes at the site, which when completed will be known as the Pickle Factory.

The gesture was organised by its developer London Square. The poppy was built from plywood at the site by staff, who observed the two minutes silence at ground level.

Remembrance Day and the annual poppy initiative is organised by the British Legion and remembers and pays tribute to the sacrifice of British and commonwealth armed forces and their families as well as emergency services, innocent civilians killed during conflicts and acts of terrorism.

This year the number of poppy sellers has been severely diminished due to Covid. To donate visit the British Legion website.