The two most important tools you have to present a property on your website are still photos and floorplans. Make sure they’re perfect, says Lisa Isaacs. 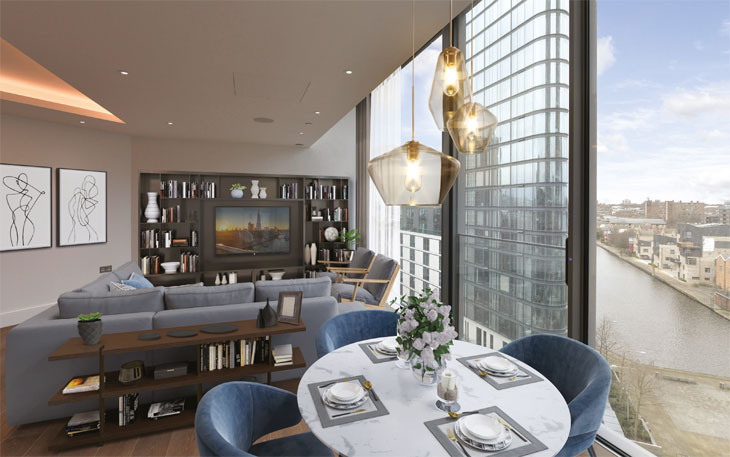 AFTER. A Dctr doctored photo, with added ‘life’.

We all agree that property marketing has come a long way in the last decade, with recent events expediting the adoption of virtual viewings and video technology. The very nature of property searches, however, dictates that quality photographs and floorplans still form the backbone of a good listing. 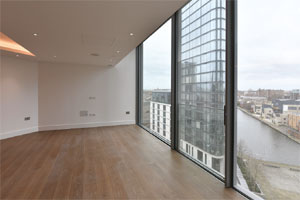 These assets are also unique in the role they in print, as well as online. They can be added to paper brochures, featured in magazine adverts and used as part of door drop marketing in a way footage and interactive images can’t.

While this feature is entitled ‘back to basics’, this isn’t a slight on floorplans and photography. These elements are now anything but basic, with more sophisticated options available to supercharge your sales and lettings listings

Photographs are a viewers’ go-to touch point, whatever medium or channel they are browsing. Some of the best property photographs we have seen have been captured by professional photographers with specific training, kit and editing expertise but what if you don’t have the budget for this? Mikus Opelts at Giraffe360 says agents can up their photography game with ease: “As a general rule, technology has made tremendous leaps – anyone can create professional-looking photographs.”

Agents will be pleased to know the ‘point-and-shoot’ method can now produce stunning results, thanks to the right equipment. “Users of Griffe360’s camera need no real training,” adds Mikus. “Our high precision proprietary camera has been designed to remove the friction of creating the highest quality digital images. Photos taken on Giraffe360’s camera are automatically created by stitching together 3 to 6 HDR images, which are available in whopping 50-megapixel resolution files for billboard advertising, for example, right down to smaller, web-ready files.

“In addition, all our images are wide-angle and professionally edited through cloud-based processing,” adds Mikus. “The camera is completely automatic, so agents simply need to choose the angle from which to capture the room, decide what will be in the image and push one button.”

Clean up your photography act

While digital photographs have replaced snaps captured on rolls of film, what you see is not always what you get – even if a cursory look on the back of the camera shows pretty good results. Agents who scroll through their images on a computer screen back in branch often rue poor lighting or curse the inclusion of clutter – and it’s these flaws that can ruin the fundamentals of a listing and scupper a glossy marketing campaign. Thankfully, clean-up editing services can polish a batch of duff photos.

“The human brain forms its first impression in 50 milliseconds, so it’s up to an agent to make sure it’s a positive one,” says Tom Durrant at dctr. He says enquiries and viewing opportunities are likely to be missed if the presentation is below par, and the real value of a home can be misrepresented with poor visual marketing.

Every photo can be optimised and the final image will show a 20-30 per cent improvement. However, the better the basic material the better the end result. Tom Durrant, Dctr.

The human brain forms its first impression in 50 milliseconds, so it’s up to an agent to make sure it’s a positive one. Tom Durrant, Dctr.

Tom is keen to highlight that although it can sharpen and enhance, it can’t edit out the truth (Dctr’s Managing Director wrote the 12,000-word RICS Guidance on the subject of misrepresentation in photographs) – power stations, pylons, telephone poles and street lights have to be kept in. 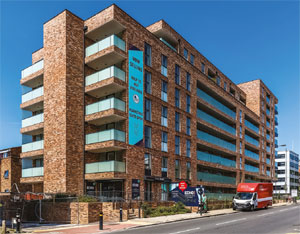 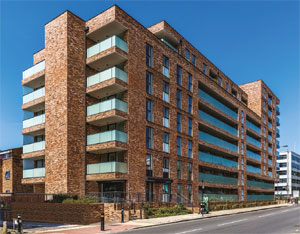 A little digital spit and polish

Dctr can, however, lighten, brighten, blur personal details and crop, as well as remove impermanent features such as cars, skips, builders’ toilets, neighbours’ bins (although any architecture hidden by the object must be represented accurately in the finished image).

“Every photo can be optimised and the final image will show a 20-30 per cent improvement. However, the better the basic material the better the end result,” adds Tom. Agents need not worry if they’re not up to the Testino or Bailey standard as dctr also teaches property professionals how to improve their photography standards – via Zoom, if required – addressing points such as camera functions, composition and scene setting.

Take to the floor for improved listings success

With videos and virtual reality on offer, is there still a place for the floorplan? It’s a resounding yes, as repeated research shows floorplans are instrumental in generating enquiries. The Property Academy’s Home Moving Trends Survey 2017 found that 90 per cent of buyers and 80 per cent of vendors felt having a floorplan was essential or very useful, while going back to 2013, Rightmove found over a third of buyers said that they were less likely to enquire about a property without a floorplan. The portal also revealed home- hunters rated room dimensions as the most important feature when looking at a floorplan.

Steven Flatman at PlanUp is quick to agree: “Our internal research shows that 76 per cent of properties for sale on Rightmove have a floor plan and according to its tracking, listings with floorplans see up to 30 per cent more traffic than those without.”

According to its tracking, listings with floorplans see up to 30 per cent more traffic than those without. They’re a vital tool to help imagine and mentally navigate. Steven Flatman, PlanUp.

He also highlights a floorplan’s importance for those who struggle with visualizing the flow of space. “A floorplan allows the potential buyer or tenant to easily see the property layout, which is a huge factor when considering a property – they’re a vital tool to help imagine and mentally navigate.” 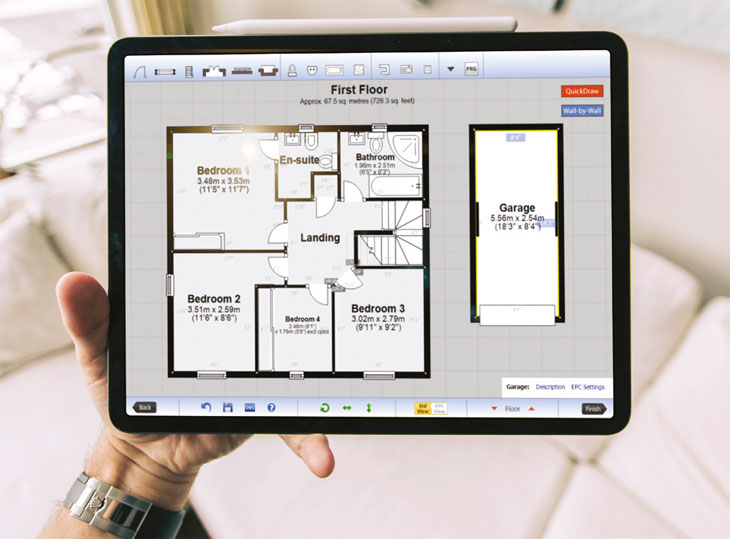 PlanUp’s software is designed to work on iPad for on-site drawing.

The hybrid floorplan is here

In PlanUp’s portfolio of products are both 2D and 3D floorplans – the latter are great for illustrating facets such as fitted wardrobes and kitchen units – and giving that little bit extra are photo floorplans. This hybrid product sits somewhere between a floorplan and a set of photos, with viewers able to hover over a camera icon on the floorplan to reveal a photograph of the room.

Between 50-60% of plans created with PlanUp are drawn using its iPad app while at the property – a common time-saving measure seen across many of today’s floorplan services – although plans can still be sketched by hand and drawn on a computer when back in the office. Steve also adds that many agents use PlanUp’s software to create property description, save having to take separate notes that need typing up later

How to nail floorplan accuracy

With listing benefits established, can floorplans also help convert enquiries into solid sales and lets? Richard Whitehurst at Locometric thinks so. He says many buyers actually rely on floorplans more than photographs in their decision-making process: “A floorplan with measurements allows prospective buyers to see if their furniture will fit and calculate price per square foot,” which is increasingly important to some purchasers. In these respects, being precise is key.

Agents using RoomScan LiDAR will walk out of the property with a floorplan automatically created for them – a time-saving benefit and improved accuracy. Richard Whitehurst, Locometric.

Floorplan accuracy used to rely on a tape measure and scribbles notes but it wasn’t long ago that incorrect measurements were touted as the next PPI scandal, with buyers wanting compensation for homes sold that turned out to be smaller than advertised. Although it’s not common to be taken to task over 1cm out, it is easy for agents to improve their accuracy.

Mikus says the era of manually generated floorplans has passed, with laser precision now the future. The Giraffe360 camera is a trade up from a handheld device, capturing 200,000 points per scan to produce floorplans as well as photos. Once complete, the files are processed using AI technology and the backend team double-checks the accuracy before delivering a ready-to-use floorplan by email.

Also reducing the margin for measurement error is Richard’s RoomScan LiDAR app-based system, which uses an array of lasers to measure the whole surface of every wall. The floorplans created with RoomScan LiDAR also yield a more detailed end result, known as a Flypan – a complete overhead bird’s eye view of every room that’s scanned. Not only does the technology account for curved walls, chimney breasts, bay windows and open plan areas, it captures the fittings, fixtures and furniture in situ, giving an accurate representation of space allocation.

“An experienced user can create a RoomScan LiDAR floor plan in real time as they walk around the property using a 2020 iPad Pro with our app installed, although we’re hoping the next release of iPhones will be app-compatible,” adds Richard. “Agents using RoomScan LiDAR will walk out of the property with a floorplan automatically created for them, which presents timesaving benefit as well as improved measurement accuracy.” 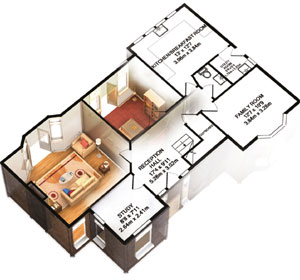 Metropix have been market leaders in floorplans and their evolution.

It is worth returning to a point made at the start of the feature – the flexibility of photos and floorplans to be included in print as well as online. Both assets can be used to establish and reinforce an agent’s brand and Metropix offers bespoke floorplans, with colour-matching and the inclusion of logos. The result is a strong stand-alone feature that provides corporate continuity wherever the floorplan appears.

So, is there still room for the floorplan to evolve? Steve Sanashee at Metropix thinks so. “Floorplans are the second most popular item on a property listing after photography and we expect this to remain the same for some time. New ways to engage with a floorplan will be introduced to keep this element fresh. The clear trend is consumers wanting to access more life-like detail of a property from their smart device, so expect floorplans to become more interactive.”

Floorplans are the second most popular item on a property listing after photography and we expect this to remain the same for some time – but with more life-like detail. Steve Sanashee, Metropix. 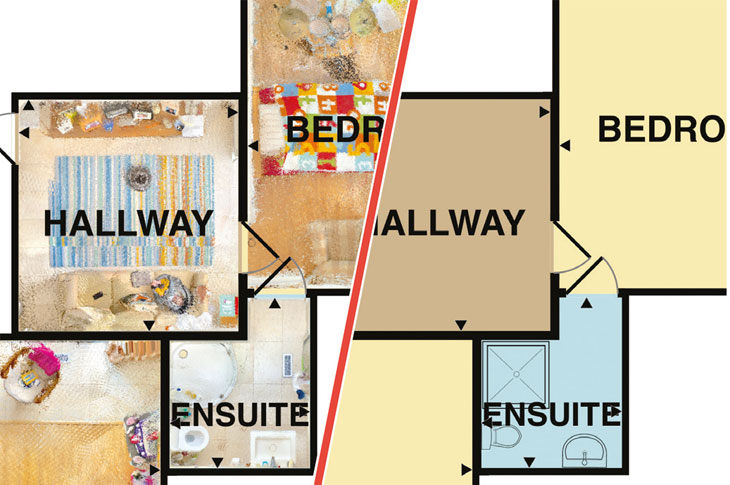