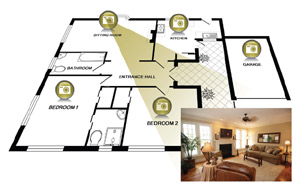 You may not realise it, but floor plans had a rocky start in the property industry. Until the 1980s they were the preserve of the upmarket agents selling big country houses and, later on, new homes developers. But for agents selling lower and mid-range properties they were an unnecessary and time-consuming expense and, until the advent of the internet and email, they didn’t catch on.

“The bigger resale properties had floor plans because the agent was invariably charging a higher marketing fee and they could afford to send someone out to the property – who would draw the floor plan and then post it back to the agent,” says Brian Farrell, MD of Exeterbased Metropix.

“And crudely speaking, that probably cost them £100 to £150 to send someone out there. But that was not commercially viable as you came down the market to the middle or lower end.

“Later on, some agents sketched onto a piece of paper and then faxed it to a designer – known as ‘sketch to fax’ – which would cost about £20. So it was slowly becoming more viable for the industry to use floor plans. But a lot of agents still thought ‘if my competitors aren’t using them, why should I sign up to use them?’

Andrew Cole of Surrey-based Floorplanz, was there at the beginning in 1989 and says it was fairly crude technically; the only agents doing floor plans then were the main national agencies such as  Savills and Knight Frank and only then for major instructions.

“Although there had been resistance, in 2000 everything changed,” he says. “The dotcom boom happened, as did email, PDF technology and digital imaging, and that’s when digital floor plans really started to take off, and when more suppliers entered the market.”

But the real barrier to the development of floor plan technology was cost and speed. As the years passed, agents have demanded faster and cheaper floor plans. Technology has, in part, solved this problem because an agent or surveyor-generated sketch can be turned around in 24 hours.

“As the industry became more sophisticated, agents started to use them for their mainstream instructions and we then came under pressure to turn around floor plans faster because they didn’t want any delay to the marketing of the property,” says Andrew.

Now the industry has evolved to offer two solutions:

1 Long distance floor plans
To turn around floor plans, companies like Floorplanz have a network of surveyors around the UK who will visit a property and sketch it out on graph paper for an agent. This drawing is then transferred to a low-cost operation in a country such as Sri Lanka or India. Designers then use CAD software to turn the drawing into a PDF, which is emailed back to the agent the next morning.

2 Self-generated floor plans
These floor plans are generated at the address of the property using a mobile phone or tablet and then emailed back to the office.

The iPad (other tablets are available!) has revolutionised the use of mobile technology – arguably this is the way the industry is going as every man, woman and their dog gets mobile these days and guess what, you can now create floor plans on one.

We get the agent to draw the floor plan into the the software at the property to stop it being a two-task job. It looks better to the client.

One of the first to offer this kind of service is PlanUp, which recently changed its name from Mobile Agent. “Our first product launched in 1999 on a ‘pocket PC’ [the forerunner of today’s smartphones] and it wasn’t even Windows,” says Steven Flatman of PlanUp.

“We always wanted to offer something that enabled agents to create a floor plan at the property. Where we differ from most of our competitors is that we try and get the agent to draw the floorplan into the software while they are at the property and stop it being a two-task job. It has been one of our unique selling points.”

“Also, we think sketching a plan on a tablet in front of your customers looks better.”

The approach seems to work. James says 55 per cent of PlanUp customers create their floor plans on an iPad rather than on a Windows PC, so there are approximately 18,000 floor plans being created on an iPad with Planup software every month. Metropix and Floorplanz also offer iPad-based products.

Most of the innovation in the market is centred around these tablet-based products – but agents are wary of the extra cost of the into the sector as agents realise it saves time.

One persistent area of confusion in the market is how many agents use floor plans at all. Metropix says it regularly checks the major portals and reports that around 35 per cent of properties featured don’t have any floor plans.

Floorplanz, on the other hand, reckons around 90 per cent of agents have the software, even if they don’t use it.

Rightmove clearly thinks agents still need a prod. The portal recently brought out a persuasive four-page research document looking at consumer and agent attitudes to and behaviours around floor plans (see below) in a clear attempt to persuade more agents to use them.

One trend that the Rightmove research also touches on, but that is less persuasive, is the use of floor plans for rental properties. Brian Farrell reckons only 20 per cent of listings have them while Andrew says they tend to be properties at the top of market that rent more slowly and generate higher fees.

“Floor plans are slowly gaining traction and 20 per cent is up from 10 per cent up a decade ago,” says Brian. “A lot of the sales agents who embraced lettings during the recession in order to make money have taken over their use of floor plans into to the lettings market.”

We create 70,000 normal floor plans a month but only about20 per cent of those are converted in 3D – that percentage is staying pretty static. Brian Farrell, Metropix. 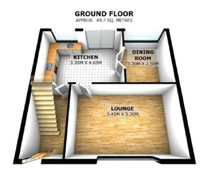 If you look at many of the supplier websites you might think 3D floor plans are the hottest thing in property marketing, and yet both agent and consumer resistance to them is clear when you talk to the major floor plan providers.

For example, Brian says Metropix introduced 3D when the company launched but that is was “ahead of its time then and we found that lots of people were coming to the table because of our 3D but then ordered the 2D,” he says. “They were more interested in watermarked floor plans than 3D ones because they didn’t want other agents to steal their floor plans.

“We create 70,000 normal floor plans a month but only about 20 per cent of those are converted in 3D – that percentage is staying pretty static. Some competitors say 50 per cent of their floor plans are 3D but when I speak to agents most say they’ve tried 3D and then pulled away from it – so perhaps you could say half of all agents have tried 3D.”

James Davis says about a quarter of PlanUp plans are 3D, possibly because they don’t charge extra for them. “Our clients draw approximately 32,000 floor plans a month of which 8,000 are converted to 3D,” says James. “So it’s conversions are at about 25 per cent – twice the rate compared to a few years ago. 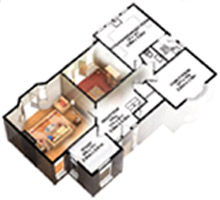 See the layout, add the furniture, mix it up… it’s the flexible floorplan!

“I think 3D plans are going to grow but they’ll never reach the same levels as 2D plans. But I believe part of the challenge here is that the older generation of estate agents aren’t always technically minded.

“So we, like Metropix, have designed our software so that it’s as easy as possible to use. Some of the CAD systems out there take months to learn how to use, and take hours to create the floor plan. Our iPad system takes about 20 minutes to draw one.”

Again, these are offered by many of the companies in this field and although they are very popular elsewhere they are less used here.

“It’s really interesting, we do much more online business in Australia in the residential sector because over there they seem much more open to new or different ideas but the market is poles apart – all their floor plans are rendered and finished much more elaborately than here,” says Owen Turgoose, Director at Floorplanz and FloorplansUsketch.

“I think over here we’re more technical and accurate and compliant. Also, videos have really taken off in the US but not here. UK agents prefer high quality still images which are quick and affordable to execute and don’t delay launching a property onto the market.

Like all things digital in property, floor plan suppliers are also now helping vendors to do some of the process themselves. This is something that the online agents are very much interested in as they try to ‘de-construct’ the industry. And a new worldwide service recently launched, www.floorplansusketch.com, that targets both vendors and estate agents with a self-service system enabling them to create their own floor plans. 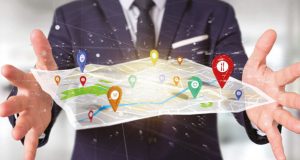 Floorplans for the digital age