Agents do suffer criticism and in some cases it may be justified. But the industry does self-police more effectively than some believe, as Joanne Christie found out. 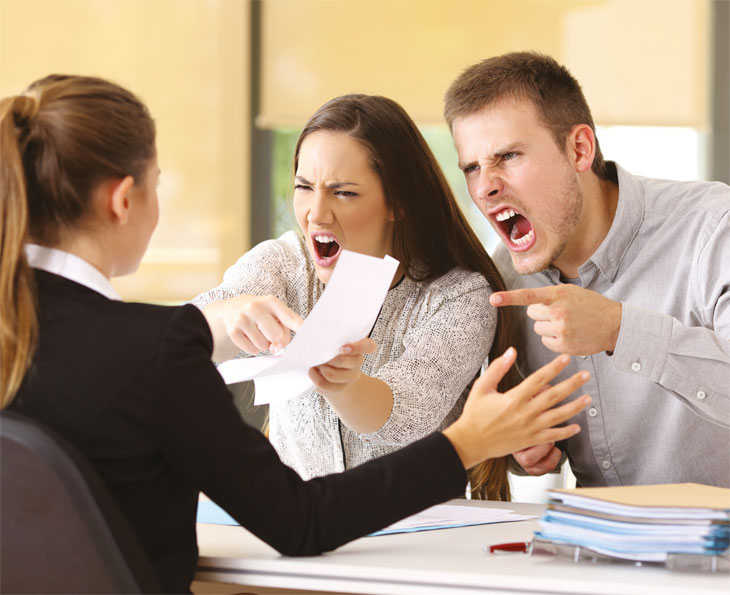 Reading media releases from Shelter, Generation Rent, et al, one might assume that our property industry serves only to facilitate rogue landlords by charging exorbitant fees to put tenants into hovels.

The increasing media presence of such organisations would also seem to suggest that things are getting worse. In fact, figures from The Property Ombudsman (TPO) show the opposite is true. Although the property sector’s leading ombudsman service is fielding more complaints, it is supporting complainants in fewer of them.

When Government started talking about banning tenant fees, we had tenants saying ‘We were charged fees!’ We had to explain that it’s not yet law. Katrine Sporle, The Property Ombudsman.

Of the 23,841 consumer complaints the body received last year, only 3,658 progressed to the formal complaint stage, a proportion that has remained relatively constant over the years, according to The Property Ombudsman, Katrine Sporle.

“We are seeing standards rise,” she says, “It’s a good story for the industry and a story it doesn’t make enough of.”

Katrine attributes the rise in the overall number of complaints to the increasing focus on the industry from the government. With phrases such as “broken housing market” thrown about on a daily basis and the huge amount of publicity attached to the tenant fee ban, it’s hardly surprising consumers have become increasingly willing to voice any dissatisfaction they have with the sector.

“When the Government started talking about a tenant fees ban, our number of enquiries started going through the roof because we had tenants coming to us and saying, ‘we are being charged a fee and the government is saying we shouldn’t be’, so we had to explain to them it is not the law yet. So these trends follow the amount of attention that any particular issue is given,” says Sporle.

Unfortunately, more general misunderstandings lie behind much of the ire directed at agents, says Mark Hayward, Chief Executive at NAEA Propertymark. “It is important that a consumer knows what their rights are, but sometimes we get vexatious complaints because the consumer didn’t get what they wanted. Sometimes that is not within the power of the agent to give. They’ve sold the property to another consumer who bid more money, or the seller decided for whatever reason that they were a better proposition.”

Although consumers are more likely to take their complaints to an ombudsman in the first case as they have the power to make financial awards, some will also complain to a professional body such as NAEA Propertymark, usually in a bid to see the agent punished.

Other unhappy customers are sometimes instead seeking to punish agents online. “We recently had a furious tenant who wrote the most damning review about us and our landlord because of a deduction for a heavily stained mattress,” says Tim Hassell, Managing Director at Draker Lettings. “The deduction was £90 and completely justified (and a little embarrassing) and if I were the tenant I would have kept quiet about it as there was very little to disagree with! Instead we had to address the situation formally via our complaints procedure.”

We carefully monitor review sites and always reach out to disgruntled customers to resolve their issue via our customer care procedure, where possible. Chris Osmond, Johns&Co.

In some cases, and somewhat unfairly, agents aren’t even being given the chance to address the complaint properly, says Chris Osmond, residential sales director at Johns&Co. “We monitor online review sites carefully and will always reach out to disgruntled customers to resolve their issue via our customer care procedure where possible. We find that in the vast majority of these cases, customers use the review site to highlight their issue and when afforded the opportunity are not forthcoming in providing additional information when we seek to find a resolution, sometimes choosing to use aliases which makes it impossible to verify the customer.”

But while the above agents may have robust complaints procedures in place, Sean Hooker, Head of Redress at the Property Redress Scheme (PRS), says many agents shy away from encouraging complaints and are therefore missing a trick. “When I go out and talk to agents I find that when you talk about complaints they see complaints as a negative, something to avoid as much as possible instead of embracing them and saying actually this is real, hard information about the way that I am providing a service to my customers and if I took it seriously and helped customers to have easy access to complaints then actually that would benefit my business.”

The cases where the highest awards go are those where the agent hasn’t been proactive and hasn’t dealt with the complaint in the correct way. Sean Hooker, PRS.

He adds that poor complaints handling is often a factor in the awards made by the PRS. “Those cases where the highest awards go are those where the agent hasn’t been proactive and hasn’t embraced or dealt with the complaint in the correct way.”

While the PRS counts mostly smaller agents among its growing membership roster, the larger brands, most of which are members of TPO, also need to keep an eye on their systems, however developed they may be, says Sporle.

“We get very professional agents and expert agents who still make mistakes if they don’t watch their frontline staff and stop them cutting corners. In a way this industry is no different to any other industry – you’ve got to put in place the right training, qualifications and staff support to make sure they are doing the right things in the right way and that needs a constant eye on it.

“Even the major corporates sometimes get things wrong.”

Both Sporle and Hooker agree that poor communication is a leading cause of complaints to their services, with Hooker adding that unclear management agreements for letting properties are also at the heart of many disputes.

One area in which Sporle and Hooker are not in agreement, however, is on the future of ombudsman provision in the property sector. Earlier this year Ombudsman Services, the third main redress provider in the sector, withdrew from providing property redress after claiming the system was too complex.

“We made this decision because we don’t want to be part of a system that is fragmented, complicated and ineffective. Redress in the housing sector is far too complex, with overlaps and gaps that make it virtually impossible for consumers to get complaints resolved,” a spokesperson told The Negotiator.

At the time of the withdrawal, it made clear it felt there should be just one ombudsman provider in the sector, and that it believed it should be that provider.

TPO, perhaps unsurprisingly, agrees in theory – albeit with itself in the leading role – but with some caveats. “I also think there should be one ombudsman per sector but I think you have to be really careful about how you define sector. So we provide an ombudsman service in the private sector and we fully understand how the private sector works and it is massive.

“I haven’t heard anybody argue for there to be only one ombudsman covering both the private and social sector except for Ombudsman Services, and that is because they have a vested interest in saying that they could provide that service,” says Sporle.

As the newest, and smallest, redress provider, Hooker understandably disagrees. “If you have an all embracing ombudsman, you have a monopoly and a monopoly is not necessarily consumer friendly.

“What incentive would there be for them to go out and promote their scheme? They would have control over price and there would be no incentive for them to innovate.” Hayward floats the idea of one “portal” that all consumers would be directed to for housing redress, but says there are various options as to what goes on behind that portal.

A government consultation on whether or not there should be a single ombudsman for property closed in April, although the outcome has yet to be published.

Agents themselves are divided on the idea. Tim Hassell at Draker Lettings argues against the idea. “Choice is essential when it comes to regulation. Any kind of monopoly/singularity would become akin to a government institution, which may become inflexible and blind to change. Agents should always have a choice of regulatory bodies.”

Osmond, however, takes a different view. “In theory it makes sense to have just one body – it’s clearer for consumers and businesses alike.”

While the sector is split on the one ombudsman idea, there seems to be broad agreement on one of the other issues explored in the government consultation: the gaps in current provision. Both TPO and the NAEA have previously been vocal about the need for some kind of redress for new homes buyers, and the NAEA has also highlighted leasehold as an area of major concern.

Sporle says there are a number of other areas where redress provision is needed, specifically student accommodation, park homes, guardian homes and landlords who rent directly to tenants.

For her part, Sporle is confident TPO could plug all the gaps. “I am absolutely certain I can put my hand up and say we are perfectly capable and perfectly able to take on all of that because we have the expertise.”

However, given at the beginning of October the government announced plans for a designated New Homes Ombudsman, it seems the idea of one ombudsman for all property issues may not come to fruition.

It may be some time yet before it’s clear how the property redress sector is going to shake out, but in the meantime, it seems that by and large, agents are doing a good job of working with the ones they have.