Seismic changes are needed if any of the top political parties’ housing targets are to be met, says expert. 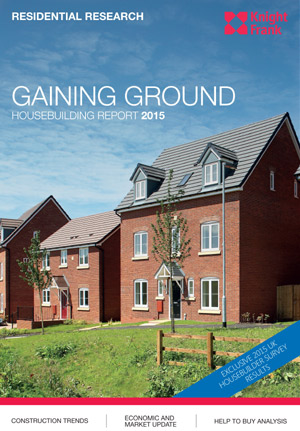 All the major political parties are proposing to develop at least 200,000 new build homes a year if elected to power this week to help tackle the housing shortage, but new research shows that level of house building may be unachievable under existing market conditions.

Knight Frank’s latest Housebuilding Report reveals that more than two thirds of residential property developers in the UK believe that it would be impossible to deliver more than 180,000 new homes a year as things stand.

More than 160 respondents from house-builders and developers across the country took part in Knight Frank’s annual survey, with 67 per cent of respondents stating that the maximum sustainable annual delivery of new homes was 180,000 or less. Just 9 per cent said it was possible to build more than 200,000 residential units a year.

Over half of all developers and house-builders said a rise in the delivery of affordable homes over the next year was unlikely. However, around 60 per cent expect a continued rise in the number of total housing starts and completions over the next 12 months.

With a general shortage of new homes coming onto the market, 78 per cent of respondents expect new-build prices to rise over the next 12 months, with 43 per cent expecting rises of up to 5 per cent.

New build property prices could be pushed higher in part by the rising cost of construction as well as high land prices, while more than half of respondents – 56 per cent – said the Community Infrastructure Levy (CIL) is weighing on development volumes.

Gráinne Gilmore (left), Head of Knight Frank UK Residential Research, commented, “In the run-up to the election, all political parties agree that the delivery of more new homes is a priority. Yet more than two-thirds of house builders believe that under current market conditions, the maximum number of units that can be sustainably delivered each and every year is 180,000 or less.
“Policymakers, especially those in power after the election, may want to heed the calls from house builders to beef up planning departments in local authorities, plough more investment into skills and training in the construction sector and provide better access to public sector land, moves which the housebuilding industry is signalling could move the country closer to building enough homes for all.”

The capacity to deliver the sheer number of new homes required is the fundamental issue faced by the UK’s house builders, according to Justin Gaze (right), Joint Head of Residential Development at Knight Frank.

He commented, “The inability to create the necessary number of new homes is being driven primarily by a skills shortage in the development sector which shrunk dramatically following the financial crisis, limited development funding and the lengthy mortgage approval process which is delaying purchasers.”

House-building expert Rosemary Edwards (left) believes that seismic changes are needed if any of the top political parties’ housing targets are to be met.

Edwards, Partner and Head of Residential Development with leading corporate solicitors Shulmans LLP, has acted for many of the UK’s top house builders for over two decades.

“I have heard of many major house-builders being accused of ‘land-banking’,” she said, “But this is patently ridiculous. A house-builder’s business is entirely based on selling homes. If they can build them and sell them, why would they hold back? In reality a house-builder will struggle to sell more than say 40 houses a year on any one site, so natural market forces mean that a scheme of 200 houses may take five years to build out. Increased planning and regulatory hurdles have added time and cost, such as the new Community Infrastructure Levy, now effective in some districts. Staff shortages in local authority planning departments can also add to delays.

“Then there’s the problem of mortgage finance. We may say that we need 200,000 new houses or more each year, but not everyone who wants a house can afford one – and mortgage eligibility criteria have tightened up considerably in recent years.”

There is currently a great deal of talk about building on brownfield sites, but doing so throws up as many problems as it supposedly solves, according to Tim Halstead, Shulmans’ Managing Partner.

He said, “Such sites often have several landowners, so you have to bring them all together or persuade the local authority to exercise compulsory purchase powers. That all takes time – and of course you have to build houses, where people want to live [which may not be on a former industrial site]. There is often the added complication of expensive clean-up of contamination or increased costs arising say from digging out old foundations. Those costs can make schemes unviable without subsidy. As long ago as the 1980s we worked on a site in Hull that got a central government grant of £20 million. There just isn’t that kind of money around right now.”

Halstead also pointed to a chronic UK skills shortage being another factor in the low numbers of new houses being built. “Many skilled construction workers left the industry during the recession,” he said. “You can’t just click your fingers and bring in an endless supply of tradesmen to get new houses built.”

Recent proposals include encouraging small and medium-sized developers back into the market, but Rosemary Edwards pointed out: “Whilst the major housebuilders like Barratt and Taylor Wimpey survived the recession, many smaller ones didn’t. As development costs continue to rise, funding remains a major issue for those developers who don’t have large amounts of private equity backing.”