Sign in or Sign up
The essential site for residential agents
Home » Features » Politics on social media – should you get involved?
previous next
Marketing

Politics on social media – should you get involved?

The General Election is upon us and all the usual political suspects are frantically travelling around the country, as well as appearing on the television and radio, trying to woo us with their charm and promises to persuade us to place an ‘X’ by their party on the ballot paper on voting day… #Conservative #Labour #UKIP #Liberals #MonsterRavingLoonyParty or #ANOther.

But amid their campaigning, and with lots of heated debates taking place, what kind of attention will each party actually place on social media as part of their attempts to engage with and gather information from potential voters?

We have already seen that platforms like Facebook have, in the US, been successfully used by political candidates to attract voters, but will politicians here in the UK embrace social media in the  same way in the run-up to the election as part of their wider attempts to get us to vote for them?

Around a third of 18-24 year-olds think social media will influence their vote, according to results of a poll by Ipsos Mori. But the attitude towards social media and political debate among Britons as whole, including some politicians, is rather more mixed.

You may find that political issues give you an opportunity to engage your comunity and reinforce your strong media branding. Christopher Walkey Marketme

I can remember when I first banged on about social media in the property industry going back about five years, trying to explain to estate agents (very few were using it back then) the power it could hold to help build their brand awareness and even increase chances of sales.

Today, I would confidently say that most agents have now embraced social media, with a growing number even securing more sales thanks to it.

But will the day come whereby elections are concentrated intensively on social media and the rather boring party political broadcasts that we often get on television become a thing of the past?

Ultimately, social media can help deliver new voters for politicians, much in the same way that it is now being used by agents to generate fresh business, but how can agents use the election to their advantage?

Given that politics is currently such a hot topic for debate, more estate and letting agents may wish to consider engaging in political discussions on their social media accounts, sharing their ideas and thoughts when it comes to things like housing policies, such as a proposed mansion tax or house building targets, in order to engage with followers and potential customers.

I have long talked about the need for agents to not only deliver property related news and advice, but to also engage with the local community via other non-property related issues, and the upcoming election presents a good opportunity for agents to this. Why? Well, politics affects people on both a national and local level and so by voicing your opinions with regards to who should be leading the country, or simply the local constituency, you’ll be engaging in discussion about a hot topical subject that people are interested in, helping to reinforce you and your firm as a leading local community voice, and more importantly a place of authority.

Most companies using social media will acknowledge that it is a strong way to reach the younger community in particular, and so there is no reason why your agency, as a local community business, shouldn’t target this audience among others, sharing opinions regarding what is happening in the local community and even offer potential advice in the process.

Politics on social media is a highly debated subject and can at times be fierce in people’s beliefs and convictions. Get on the wrong side of some beliefs and you may be open to a backlash.

But as an estate agency it is important to be seen to be participating in the local community, offering thoughts about both the local and national property market, along with a host of other topics.

By embracing social media correctly and understanding your key target audience’s activities and comments on the likes of Facebook and Twitter, should enable you to understand what position you can place yourself in with regards to community affairs and opinions towards politics and wider issues. You may find that a gap is there for you to fill, an opportunity to positively engage your local community, while reinforcing your strong social media branding, by engaging in topics and discussions relating to local issues.

By putting yourself carefully in to the local public eye, you are helping to create both positive and increased brand awareness for yourself and your firm, helping to put your business at the forefront of the minds of people in your local community, or those looking to relocate to it, especially when thoughts lean towards property and housing on a local level. 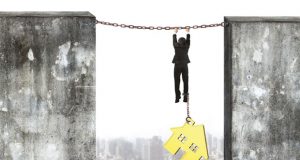 The chain gang – conveyancing under pressure