The power of a plan

Want to be the local superman in estate agency? Then you need a plan – a super floorplan, says Marc Da Silva. 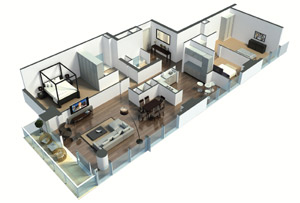 Whether browsing through a multitude of listings on a property portal or looking at the property particulars in printed format, most house-hunters demand as much information as possible to help make an informed decision as to whether or not to view that home in person, and while property descriptions and photographs are both crucial, they alone are not enough.

From providing information about room sizes and the length of the walls to the general layout of the property and even the direction a house faces when considering how much direct sunlight is received, a floorplan is generally one of the first things that most house-hunters now look for as it really will help them decide if the property is worth a viewing expedition.“Most people just want some idea of layout and room sizes,” said Vivienne Harris of Heathgate estate agents, “We fi nd that 2D floorplans work just as well as 3D plans.”

50% of sellers will not instruct an agent who doesn’t provide a floorplan.

A recent home buying survey of 2,009 adults, conducted by E.ON, showed that house hunters typically view eight properties, on average, and take up to 16 weeks before putting an over in on their ideal home, it is not uncommon for some prospective buyers viewing several properties to occasionally forget the precise layout of a dwelling, even after viewing it.

Thankfully, floorplans can, aside from enable people to visualise the layout of the rooms before visiting a property, also help give an applicant that ‘quick reminder’ of layout that is often needed at a later stage.

“Floorplans are essential in our opinion,” said Mandy Stevenette of Stevenette & Company. “They allow applicants to very quickly understand the layout of a property, how the space flows and the relationship or proximity of one room to another.”

“They are also very useful for reminding a viewer of a property if they have seen several in a short period of time. Pictures are, of course, helpful but there is nothing like a floorplan to ‘mentally walk through’ a house to get a good understanding of how suitable that particular property is for your needs,” she added.

To truly understand how influential floorplans can be, an agent only needs to refer to a relatively recent Rightmove study of 10,000 people which revealed that over half of the people surveyed would not instruct an agent if they did not provide a floorplan.

The study also showed that 78 per cent of sellers rated the importance of having a floorplan when selling as “7/10” or higher, while 20 per cent of potential buyers or tenants said they would either “ignore the property advert completely” or “only re-visit it if nothing else caught their eye”, if a floorplan was not published.

The statistics illustrate the importance that both buyers and sellers today place on floorplans and also mirror previous research by Rightmove which found that properties with a floorplan generally receive up to 30 per cent more interest than those without.

Now that people planning to move expect a floorplan, it is unsurprising to see that, like other advanced visualisation systems, they are now firmly established as a primary marketing tool that is adopted by the vast majority of UK estate agents.

“In our view, floorplans are an essential element of the property marketing toolkit,” said Tom Botting, Manager of Bairstow Eves’ Maidstone branch.

Around 66 per cent of the properties listed by agents on Rightmove.co.uk now include floorplans, according to research conducted by The Mobile Agent, a leading floorplan software provider that has launched an iPad compatible system that enables agents to draw up floorplans onsite, whilst theoretically valuing a property.

The Mobile Agent’s James Davies said, “When going out onsite we recommend that agents use an iPad to draw up floorplans in order to save time by not having to duplicate work by initially drawing out plans on paper and then transferring them onto a computer back at the once – it also looks more professional in front of the client. The number of agents using our floorplan software, which can be instantly downloaded from the App Store, continues to increase year-on-year.”

“Almost 70 per cent of floorplans listed by agents on Rightmove are produced using software provided by either ourselves or Metropix,” he added.

The major floorplan innovator, Metropix has also seen demand for its software system soar, 1 million floorplans produced on the Metropix system in the past 11 months.

2D and 3D floor plans, interactive floor plans, 360 Virtual Tours, motion graphics, property videos, computer generated images, animations and ebrochures, there are lots of options available to those marketing homes for sale or to let, some of which we will focus on in the next (October) issue of The Negotiator. But standard 2D plans remain the most popular fl oorplan of choice for most agents.