The BBC documentary looks at both sides of the property boom taking place in central Manchester including agents, developers and local residents.

The estate agent featured in last night’s BBC documentary Manctopia is a leading figure in several campaigns within the city including homelessness and leaseholder issues.

Jennie Platt, who owns an eponymous estate agency in the fashionable area of Prestwick, was featured heavily last night in the programme at the beginning, extoling the virtues of the newbuild boom taking place in central Manchester.

This includes a long scene (pictured, above) where she takes a couple around an £8,000 a month luxury penthouse flat, at the end of which she also highlights the lack of affordable housing in the city.

But Platt is also a familiar figure in both local and national media, having led a campaign to highlight freeholders who put ‘homelessness spikes’ at the front of buildings, and commenting on the problems caused for leaseholders by the ongoing cladding scandal.

Platt also made her name nationally several years ago when her agency marketed a £15,000-a-week apartment belonging to footballer Phil Neville. 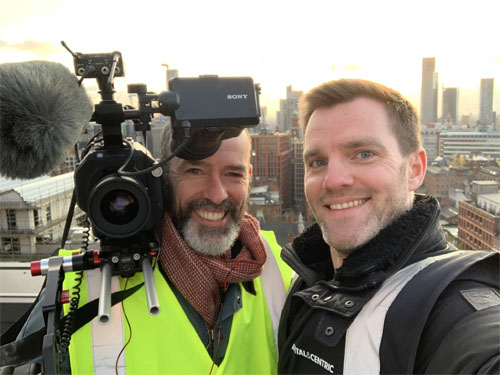 He is also a high profile fundraiser and sits on Greater Manchester Mayor’s Charity, set up by Andy Burnham, the mayor, which has raised £2m for charities tackling homelessness.

The programme has come in for some stick on social media focusing mainly on Heatley, who has become a hate figure for anti-gentrification campaigners in Manchster.

“Manctopia illustrates a common self-deception and common dissonance amongst those contributing to social problems,” says Edward Dickonson on Twitter.

“[They] devote their career to building and selling housing for the very rich, creating homelessness & inequality, but do a fundraiser and wahey, their conscience is cleared.”

Watch the episode on iPlayer.