Sign in or Sign up
The essential site for residential agents
Home » Features » Property auctions: lots of change
previous next
Marketing

We ask: where do the new methods of property auctioneering leave the traditional players?

We think this is a good move... 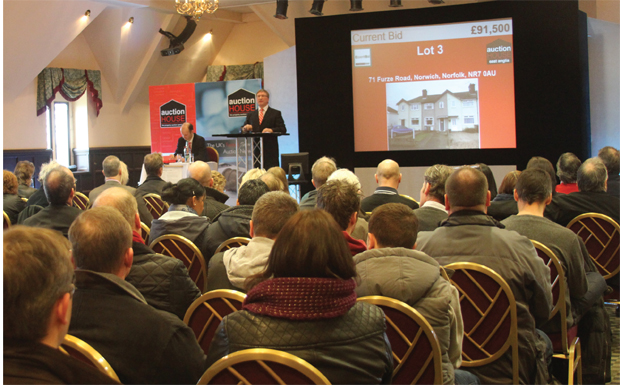 For estate agents, property sales and lettings processes have changed irrevocably in recent years as portals such as Rightmove and Zoopla have radically altered the way homes are marketed, as well as how agents get their leads.

The way auctions and lots for sale are marketed has also been changing fast in recent years, a process that’s been accelerating as new models and technologies begin to open up the industry to both more estate agents and direct-sale vendors.

But the revolution in the auction world has been much slower to arrive, held back by the fragmented nature of the industry and the technological challenges of putting auctions online – not to mention consumer wariness of the proposition.

Only a few years ago auctions were held in hotel ballrooms, they offered only paper catalogues and issued legal documents only for a hefty fee. “Back in 2006 I remember most auctions charging about £25 for a property’s legal documents which would take three days to arrive by post whereas now they’re free and available to download online,” says David Sandeman, Managing Director of the auctions portal the Essential Information Group (EIG).

Since 1991 EIG, which makes its revenues from charging auctioneers for its software and services, has been instrumental in taking auctions online and offers a service that enables small and medium size auction houses to compete nationally with their larger competitors such as Countrywide, Savills, Sequence and Allsop.

This is because the EIG site lists the catalogues of every traditional auctioneer in the UK, regardless of size. But although the company offers the ability to see bids as they come in during an auction and occasionally live video too, it is not able yet to offer bidding online (though David Sandeman says this is coming soon) and this is the key area of future innovation – online bidding, something that will revolutionise the industry and create the potential for a Zoopla-like online auction portal, although most players in the market admit this ultimate aim is some way off.

However, the most recent innovation has been a new model, the ‘networked’ auction, which enables estate agents to either sidestep the traditional auction houses and conduct their own auctions, or not have to organise themselves directly, as some used to do.

When using networked auctions, agents become ‘partners’ and are able to offer their vendors a quick (albeit riskier) sale at auction if a property is proving difficult to sell through traditional means. For the agent it’s cheaper because, rather than getting their fee from the vendor they instead usually receive it from the successfully buyer at auction – splitting the buyer’s fee with the auction provider.

The most aggressive and, arguably, successful player in this market is London-based Network Auctions which although it calls estate agents partners, treats them as semi-franchisees because the agent presents themselves as ‘the auctioneer’ and in return receive property and auction advice, training and legal support.

“Our model of enabling agents to offer properties via their own auction rather has significantly extended the overall market, which can only be good for the industry in general,” says Guy Charrison, Managing Director of Network Auctions, which started up in 2004. “Also, I think we’ve helped grow auctions’ share of the overall sales market, a share which has doubled in recent years and now stands at around 7 per cent and rising, according to EIG.”

Network Auctions is not alone, though. Norwich-based Auction House claims to be the UK No.1 auction house with more of a licensing-cum-franchising operation in which agents or auctioneers sign up to take a piece of the Auction House map and run auctions with its help and brand. Roger Lake, Director, says, “Auctions are becoming mainstream with ordinary buyers and sellers attracted by the speed and certainty that the process provides. Corporate sellers choose to auction their stock in region but want to deal centrally with a national operator. Both seller groups like our strong national brand, local auction rooms and powerful web marketing. Traditional auctioneers see the extra lots that our connections offer and they like our partner agent programmes and marketing support.”

A third player, launched in 2009, is Newcastle-upon-Tyne based www.iamsold.co.uk which is a hybrid between Network Auctions and Auction House, and offers a white label service to agents who can then brand auctions as their own.

“I believe we have a unique offering because we’re a way for estate agents to outsource their auctions and it’s proved very popular, says found and MD Jamie Cooke.

Jamie says that his company represents 750 branches via 350 estate agents, enabling agents to offer an auction under their own brand while www.iam-sold.co.uk handles buyer enquiries, provides legal packs and “does everything.”

Jamie’s is also keen to point out that competition in the auctions market is also creating innovation, and the idea that a property must be committed to at auction (10 per cent deposit straight after the hammer has fallen and completion within 28 days) is being challenged.

For example www.iam-sold.co.uk offers what it calls a ‘modern method’ to bidders which is a reservation fee up front instead of a deposit and then a commitment to exchange within 28 days and complete within a further 28 days. Jamie Cooke says approximately 85 per cent of its transactions now use this method.

Guy Charrison also says this is an area of change and that, although Network Auctions backs the line of a four week or 28 day completion, he’s “seen some of auctions stretching this to six.”

How is the auction market? 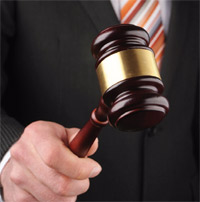 Last month an email circulated around the industry that suggested the market could be ‘on the slide’ and, while many recipients may have pressed delete with some amusement, there are a few signs that the frenzy of activity that took place up to the traditional summer lull did alarm some people in the industry enough for worries of a auctions ‘bubble’ to rise.

Phillip Wakefield of Strettons says he thinks the market has been overheating recently and that hopefully “people have had time to reflect over the summer” and that although “the market is a bit sticky at the moment as the Mortgage Market Review dampens things down” the trend for reserve prices to go too high should settle down.

“But it’s not a national picture – auctions down south may have been booming but for example it’s still pretty tough in the Midlands, where I come from.”

Guy Charrison of Network Auctions doesn’t think the market has overheated, saying the “high number of legal pack downloads from his partner sites” in recent weeks would indicate a very busy autumn for the auction industry, not a slowdown.

But figures from the EIG Group support the cooling down theory. Between July and August last year the number of lots sold via the EIG Group site increased by 17 per cent while during the same period this year they rose by 9 per cent. Latest figures from EIG show that 27,157 residential properties were sold over the past 12 months, up just 4.5 per cent year on year.

But all this competition within auctions is starting to put immense pressure on the smaller, local auctions, which are seeing their former local monopolies challenged by the networked auctions.

Guy Charrison suggests that local auctioneers who were once the only auction house in a small town, for example, have one choice – to hope their EIG listing can bring in enough traffic to keep people coming through the front door, or become a partner or franchisee with one of the network groups. “Many of our partners are agents who have realised it’s a better idea to join a network and let us provide the infrastructure while they focus on doing what they do best, which is sourcing properties to list,” says Guy Charrison.

There are many who disagree with him, though. A meeting of RICS auctioneers was convened this summer to debate the issues within the industry including networked auctions.

“Personally, I don’t like them because I’m keen that we maintain the service that people who attend traditional auctions have come to expect,” says Phillip Wakefield of London-based Strettons Auctions.

“People who run auctions need to have proper training because those who bid on properties need to have the confidence to make properly informed decisions about what they are buying,” he says. “For example, we don’t want stories of bidders being scammed in circulation; it doesn’t do the industry any good.” The networked auctioneers counter that they invest significantly in training for their partners and for example iam-sold.co.uk claims to have some 60 staff on the road working with agents to ensure best practice.

But the network auctions are not the only new players. John Pye Auctions, which has a 46-year track record selling in other industry sectors such as motoring and retail, has just launched into the property market and has an established platform, a four-year history of offering online bidding and a thick contacts book, particularly within government and banks.

“We start all projects very much with a blank canvas,” says Sheldon Miller, Head of Business Development at John Pye Auctions. “Obviously we do our research and due diligence but we always ask why is it currently done this way?

“Often we’ve found in the auction world – whether chattels or property – things are done a certain way because that’s just the traditional way of doing them and no-one asks any different. It may not necessarily be the most suitable process for the customer.”

And it’s not hard to see why Sheldon Miller wants some of the action. The residential sector sold lots worth at least £3.62 billion over the past 12 months and therefore, like John Pye Auctions, the
number of new entrants into the market and competition for catalogue entries, is likely to increase.

We think this is a good move...