Property family moves back to York 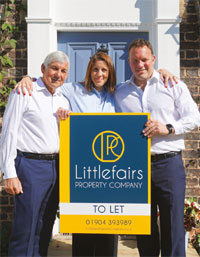 A recently launched property management and lettings business in York, founded by a local family of property professionals, is already managing more than £40 million worth of rental property – and has more than doubled its year one target, in its first nine months of trading.

Littlefairs Property Company was founded by Scott Littlefair, his father Richard Littlefair and sister, Donna Sanderson. The trio previously owned and ran Letters of Distinction, which they built into a leading independent sales and letting agents before selling to Countrywide four years ago. In January, they set themselves a target of managing 90 rental properties within 12 months and just nine months later they already have a portfolio of more than 200 homes on their books.

We have glowing testimonials from our landlords and tenants, personally and also on Google reviews, so it’s been a very rewarding nine months.”

Managing Director, Scott Littlefair, said, “We are really pleased to be back serving the property market in our home city of York, but also in the surrounding areas of Harrogate, Wetherby, Thirsk, Ripon, Leeds and beyond. With over 45 years’ combined experience, we are well placed to provide landlords with a personal and well informed service to attract high quality tenants and maximise their rental income.”

Donna added: “Since we started Littlefairs Property Company rents have increased around 15% during those four years and tenant demand is the highest we have ever known. The properties we are letting typically rent from £600 per month for a one bedroom unfurnished home through to £2,500 for a five bedroom detached house. We have already received many glowing testimonials from tenants and landlords, personally and via our online google reviews, so it’s been a very rewarding nine months.”