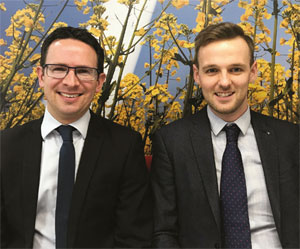 JLL has promoted two members of staff in Scotland to senior surveyor.

Scott McKenzie of JLL’s Project & Development Services team and Robbie Elrick who works across the firms Alternatives team in Scotland are both promoted from Surveyor to Senior Surveyor.

Elrick, who became chartered in 2016, joined JLL’s graduate programme in 2014, having worked part time within JLL since 2013. McKenzie has been with JLL since 2014, and qualified as a chartered surveyor in 2015.

Alasdair Humphery, Lead Director in Scotland for JLL, said, “We’re very pleased for Scott and Robbie to take this next step in their career. I congratulate them both for consistently achieving ambitions, and for going above and beyond for our clients. We take great pride in nurturing our own talent and giving them opportunities to grow within the business once qualified.”