Designs on Property tracks and summarises the property indices. Kate Faulkner says, “The shock statistic is that for the first time in a long time, property price growth over the last 12 years is way below the inflation rate, which property normally beats.” 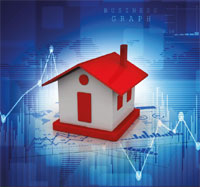 Rightmove: “2020 forecast of 2% price rise as election gives a window of certainty.”

Hometrack: “While the election result removed some uncertainty, market fundamentals set the context for city house price growth and market activity in 2020.”

This is probably one of the most ‘stable’ and most consistent times we have seen in the UK’s overall average price for many years – regionally the picture is still incredibly mixed.

UK HPI Market analysis by country Kate says: Despite the stability of the UK’s national average, the individual countries are seeing quite different price changes. However, some reporters are getting a little too excited about reporting rises of 3-4% when these are well below long term averages that the industry and sellers are used to. Unfortunately, the focus on ‘year on year’ as opposed to historic price changes means the influential headlines are being skewed, so local property companies need to ensure they give local people an accurate picture of what’s happening in the market in their area to drive sales.

This is probably one of the most stable and consistent times we have seen in prices for many years.

Wales is seeing the next highest growth, but prices are just 11% higher than they were 12 years ago, with Scotland just 6% higher and England, mostly driven by the South and London have risen by 28% in comparison.

The shock statistic is that for the first time in a long time, property price growth over the last 12 years in each country is way below that of inflation, which property normally beats.

This is particularly important to be aware of when recent ’10 year reports’ have been, inaccurately in my view, reporting ‘soaring house prices’ over the last decade – completely ignoring the fact that at the point they measured the market, we were in the middle of a recession with prices on average 20% lower than they were in 2007.”

The idea that house prices have ‘soared’ for anyone is really stressed by the regional statistics that show that areas such as the North East haven’t yet recovered to 2007/8 prices and are actually moving ‘backwards’ again. 18 months ago, the average property price peaked in the NE at £131,245, now it’s fallen to £129,360 (bar one month anomaly).

Only areas such as the East, South East and London have really seen house prices grow at a level that people are used to.

What’s important is that the industry and government tell first time buyers that property in many areas IS actually affordable, it is not an impossible task. In areas where property affordability is tough we need to ensure alternatives are explained properly, making sure the industry and consumers understand the realities of shared ownership, rather than believing this is a tenure you have to share with other people!

Halifax: “Scotland was the strongest performing home nation in 2019, with prices up 2.8% over the year – the first time since 2008 that it ended the year as the top performing region.

“Wales saw a further slowing in house price growth to 1.5%, from 2.9% in the third quarter. Price growth also continued to moderate in Northern Ireland, with average prices up 1%, down from 3.4% in Q3. “England remained the weakest performing nation, with prices up 0.2% compared with a year ago. The West Midlands was the best performing English region.”

LSL Acadata HPI: “Having been at the top of the house price league table for the last six months, Wales has now been pushed into second position by Yorkshire and the Humber, where average prices over the year have increased by 3.3%. The number of regions in England with negative growth rates has fallen to two.”

Hometrack: “UK city house price inflation has averaged 4.4% per annum over the last decade with average prices up by total of 54% since 2009.

“The headline rate of growth currently averages 3.4%, supported by price falls in the final months of 2018 dropping out of the annual growth rate and a further pick-up in growth in London. Price growth ranges from -0.7% in Aberdeen to +5.4% in Edinburgh.

“There is a marked difference between the current and 10-year growth rates across UK cities. Cities in southern England registered a marked slowdown in price inflation over the last 1-3 years with current growth rates well below the 10-year average – Oxford, Southampton, Portsmouth, London, Cambridge, Bristol.

In contrast, cities that have been slow to see prices recover, registering some of the lowest price growth, are those currently registering above average growth e.g. Belfast, Liverpool, Glasgow. Average prices are virtually unchanged between 2009 and 2019 in Aberdeen and Belfast.”

Although it seems ‘sensible’ to look at how house prices have performed over the last decade, it skews what is really happening in the property market – which for many, is very little. Prices in Belfast for some are still 37% down versus 2007/8. If we want buyers and sellers to interact with the property market, we need to tell people the reality, rather than suggesting property prices are ‘soaring’ and are still ‘unaffordable’ for many – this is not true. Property price growth has changed and forecasts over five years suggest growth of a few percent. 6-7% annual rises are not expected for some years, if ever. Great news for buyers and sellers, both can enter into the market without the pressure that has existed in the past.

Kate says: Despite the huge levels of uncertainty in the job market, economically and, of course, politically, the property market from both a transaction and price perspective has remained unbelievably robust. For me, this is because people are less ‘spooked’ by scary headlines understanding that the need is to put a roof over your head. With most families now experiencing two recessions (1990s and 2000s) and seeing that if you hold on for long enough – up until now – prices tend to recover. The Advisory shows that despite lower demand and sales for 2019, there are still plenty of hotspots while in some areas it’s taking its time.

In 2020 I’m expecting to see a flurry of activity up until around May due to pent up demand and supply as people held off due to Brexit – but the market is likely to settle back in the second half of the year.

Rightmove: “Demand for property remains resilient as we move into 2020, though lack of supply is a concern. The monthly decrease (-0.9%) is the smallest at this time of year since December 2006, showing that sellers and their agents think that demand is strong. The number of sales agreed so far in 2019 is down 3% on 2018, while properties coming to market is down by 8%.”

RICS: “New buyer enquiries continued to slip for the third consecutive report with a net balance -9% of respondents citing a decline. When disaggregated, demand reportedly fell to a greater or lesser degree across all parts of the UK.

“New instructions to sell once again dipped at the national level and, in light of this, average stock levels on estate agents’ books remain close to record lows at approximately 41 properties per branch.”

Bank of England: “Mortgage approvals for house purchase (an indicator for future lending) were unchanged in November, at 65,000, remaining within the narrow range seen over the past two years.”

The Advisory (see Hot and Cold Markets above) tracks current conditions, so buyers and sellers can gain an independent view of how easy it would be to buy and sell their home in their area. This makes it easier for good agents that are honest about market conditions to value and manage expectations. For example, in BS7 78% of the properties on the market are under offer.