Sign in or Sign up
The essential site for residential agents
Home » News » Agencies & People » REVEALED: The agent duo behind BBC’s latest property TV show Rent Like A Boss
previous next
Agencies & People

Launched yesterday, BBC3's Rent Like A Boss sets out to help struggling tenants find their ideal home in different cities around the UK.

Agents watching the latest property show called Rent Like a Boss on BBC3 yesterday may be wondering who the two ‘experts’ featured on the programme (see above) might be.

Named only as Tobias and Big V, the pair are the lettings equivalent of Phil Spencer and Kirstie Allsopp, helping struggling tenants find their ideal rented home.

We can reveal that the pair are Tobias Alexander from Alexander Rose Estates, a Keller Williams listed agent operating in central London. He set up his own agency in November last year. Big V is Charles Haward, a former Portico agent who worked for Keller Williams as a sales director until late last year.

He is now a BBC TV presenter contracted to the Beeb since December last year, and is one of the growing Instagram agents in the UK who use considerable social media followings to market their properties. Haward is also chums with Daniel Daggers, the UK’s best known ‘Insta-agent’.

The programme is all about ‘how hard it is for young people to rent’ and in each episode the two agents help two different prospective tenants find their ideal home. 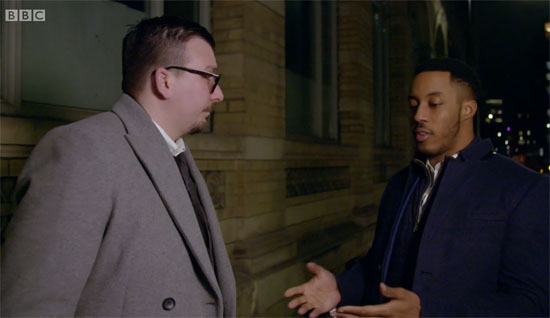 During the first episode the pair visit Manchester to help a young man from Wigan find a houseshare in Manchester and a first-time renter in Belfast (right) with a motorbike problem.

Later in the series the pair visit Stanraer in Scotland, Leeds, Liverpool, Wolverhampton, Birmingham and Newcastle.

The programme has generated considerable publicity after the programme encountered significant problems as it tried to find a home for a wheelchair user looking for an affordable and accessible rental property.