Property slowdown is a myth for majority of London 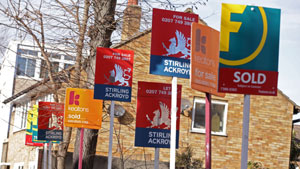 London has avoided any indication of widespread house price falls, with negative price growth confined to London’s traditional ‘prime’ market, according to new analysis from Stirling Ackroyd, in the London Hubs Tracker.

Price drops have been confined to the top 25 per cent of London’s property market – with negative quarter-on-quarter growth of -0.6 per cent in Q4 2015, or annualised house price falls of 2.4 per cent.

By contrast, if London’s old luxury postcodes are excluded, the remaining three quarters of the capital saw a 2.0 per cent rise over the same period – or annualised house price growth of 8.2 per cent for the overwhelming majority of London’s more ‘normal’ neighbourhoods.

Across the board, house prices in the capital rose by 1.6 per cent in Q4 2015 – with the average London property now worth £533,000. As a broad average this translates to a 6.6 per cent annualised growth rate for the whole of Greater London.

Out of a total 272 postcode districts in the capital, 47 saw local drops in average property values (a 17 per cent minority). However 32 of these districts – or an overwhelming 68 per cent – fall within London’s traditional ‘prime’ top quarter of the property market (by absolute value).

Within the top quarter of London’s property market, a given postcode has a roughly 50:50 chance of hosting falling house prices (48 per cent of 67) whereas for the rest of the capital a given postal district has a 93 per cent probability of price rises.

Andrew Bridges (left), Managing Director of Stirling Ackroyd, comments, “Luxury no longer means profit – or at least you can no longer presume so. London’s hugely diverse property market is undergoing a serious readjustment, with the traditional old heart of ‘prime’ London under pressure from many fronts – from a low global oil price and China’s economic slowdown, to stamp duty reform and international fears of Brexit.

“Yet for most of London’s communities, these factors affecting luxury buyers are less important. There are still too few new homes coming onto the majority of the market compared to demand from a growing population – and the majority of the London market is still in tune with, and restrained, by those fundamentals. Anyone who thinks that London property is synonymous with international jet setters is only looking at a very small part of what London has to offer.

“There is also an outwards wave of interest, away from the old peaks of property prices. Within the wider spread of London home buyers, a growing band of increasingly affluent people can no longer afford the most overcrowded traditional areas of ‘prime’ London – and this demographic of professionals are redefining the map of the capital’s up-and-coming locations. New, dynamic parts of London are emerging further east, driven by a less traditionally exclusive but highly aspirational clientele.”