Sign in or Sign up
The essential site for residential agents
Home » Features » Business tips » Proptechman!
previous next
Business tips

Is it a bird, is it a plane? No it’s Nathan Emerson! This month Nathan urges us to recognise what has helped us through the pandemic crisis and embrace it. 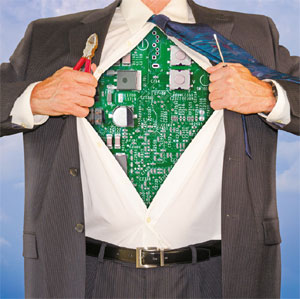 Now the keen reader will notice that we as an industry have remained open; in fact, you could argue we are more open now than we have been for a long time. Many agents are busy, properties are selling, letting and enquiries are coming in. New stock is the problem for many and the sadness that the comfort blanket of a burgeoning pipeline may start to dwindle as transition speeds begin to catch up and the Stamp Duty holiday finally subsides at the end of September.

Having transitioned and adapted our businesses from the beginning of the pandemic in so many ways, it is easy to forget where we originally came from. Looking back over the notes and recordings I had of webinars and mentoring sessions at the beginning of the pandemic, the one thing that was apparent to me was the abject shock that was registered on everyone’s faces as they contemplated how they were going to carry on and afraid the property market would shut down.

Luckily for us, along came a hero of sorts in the guise of proptech and video. Having been a proptech advocate for years, it was for me the first time proptech had come to the fore and really showed its worth. Not just a bit of time saving, not just a bit of efficiency but the ability to literally save businesses and allow them to function.

We have learned a new way of operating and a more efficient way of working.

Quite frankly, we would have been in the Dark Ages and unable to function, unable to communicate effectively and unable to process and handle client funds. Even up until a few years ago the technology to help us function through lock down simply did not exist and if it did it was in an unusable and unreliable format. So, the Superhero known as Proptech literally saved our business.

We have learned a new way of operating and a more efficient way of working and assisting clients and customers by blending traditional working practices with modern methods. For many, the world has changed for good and to coin a well-used phrase, “Our industry has literally advanced five years in the last 12 months”.

Return to the old ways?

Discussing the future of trading recently on several group forums brought for me some very interesting observations. Having gone through for many their most positive, profitable period using and utilising new technology to reduce first viewings, create more efficient working and support more enquiries, I was surprised how many under scrutiny will be dropping many of the very tools and practices that have helped them change their business for the better.

It’s almost like, saying thanks for saving me Superman but you can go now, you are not really wanted at the after party. Then like Dr Who you jump back in your Tardis and take yourself back to the pre-Covid working patterns as though it hadn’t happened.

Agents who were on top of their inspections for the first time ever, by using remote tech, with landlords fully updated, had already gone back to face-to-face inspections and within weeks were falling behind and seeing the phone not answered as more staff were out of the office.

Others, who had been insisting on video viewings and 3D tours before arranging physical viewings, were heading back to 100 per cent physical viewings with disorganised chaos, viewing numbers going up and viewing-to-sale ratios increasing steadily as they encouraged non-proceedable buyers to view. Staff were becoming over stretched as diaries filled up with phones not being answered as a result.

These are just two examples, but many others existed.

Why you may ask yourself, would this happen? The answer is very simple. They say change is good, but in reality, we all fear change and many of the actions, processes and procedures we all use are from learned behaviours. We drop back into familiar routines and practices like a pair of comfy old slippers.

The paper comes out, the physical viewings, valuations and inspections on every property. Physical ID, the hand-signed contracts and tenancies… and so on.

Perhaps just perhaps this time we should let our Superheroes at least hang around for the celebratory party, you never know you might miss them when they have gone or worst still your competitor embraces them and grows their business, at your expense. Very quickly it might be your own clients that don’t want to attend your party and prefer your competitors instead – especially when they have Superhero guests.

So, forget being the Time Lord for now, stop reinventing the past and explore the new things that you have created further still. With repetition and consistency, you will reap the rewards.

Talk to Nathan at [email protected]