Nigel Lewis talks to the industry’s leading lights about the big issues. This week, it’s the turn of Isobel Thomson, CEO of the National Approval Lettings Scheme (NALS) and architect of the Fair Fees Forum. 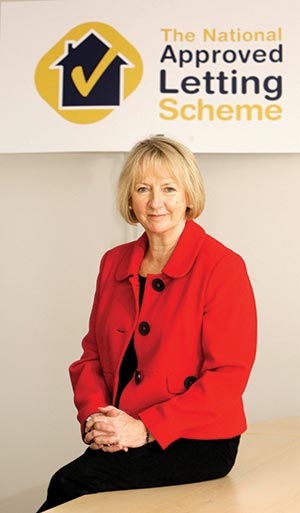 Do you think the letting fees ban will really take place – if so, any idea of timings yet?

Yes it will go ahead. It’s our understanding from officials that feedback from the recent consultation exercise will form the basis of a draft Bill to be scrutinised by a Select Committee before proceeding further in the parliamentary process.

This effectively adds another layer of oversight to the content of the Bill and the opportunity for stakeholders to give evidence if called upon by the committee.

There is still a way to go yet before the ban comes in and we will be working hard to secure a fair outcome for all parties in the rental process: tenants, landlords and agents.

Many letting agents are frustrated by the rogue agents who give them a bad name – week in, week out – can you see this ever being resolved?

There is a minority of agents who give the sector a bad name. Yet they are the ones the media always focuses on and presents as the norm.

We need more effective enforcement and policing by Trading Standards which would weed out those who continually flout the law.

NALS understands the pressures Trading Standards are under and the decisions they have to make on which areas of business to deal with and that’s why we produced a toolkit for them last year to help in the process of prosecuting those agents who fail to comply.

We also continue to lobby government for full regulation of lettings and management agents.

Do you think the tax take on landlords is a good idea – evidence points to a reduction in properties available to rent and rising rents?

Increased costs from tax rises, as well as the fee ban when it comes in, could force landlords to raise rents or withdraw from the market.

This inevitably contributes to a growing housing crisis and risks impacting on those who are most vulnerable. We would like to see a coherent housing policy rather than the piecemeal approach adopted by government to date.

The number of landlord/letting agent licensing schemes are increasing each year – what’s your view on them?

We have seen a plethora of Local Authority licensing schemes springing up in the last few years but with each individual area setting different criteria it makes it impossible for landlords and agents who operate in multiple locations to navigate the administrative processes.

NALS would like to see a standardisation of the administration of schemes and a steer from central government on how these should operate.

There are a lot of letting proptech startups ‘disrupting’ the market at the moment – OneDome, No Agent, Upad, etc – do you view them as something good for the industry?

Innovation is good in any sector but consumers should always ensure that they understand what they are paying for and that they are protected should anything go wrong in the process.

Do you think the public are sufficient aware of Client Money Protection and the standards agents should be meeting – has NALS/SafeAGENT done its job there yet?

Consumers are aware that they need to have financial protection when renting or letting but make the false assumption that it is automatically in place.

It is only when something goes wrong that they realise they should have checked at the outset.

There is still more to be done in raising awareness of client money protection schemes.

NALS and the SAFEagent campaign, which it administers, were delighted when the government announced that they would make inclusion under such schemes a mandatory requirement for all agents.

This was definitely a win for the industry and those agents and organisations that supported the campaign. The requirement has not yet been implemented so we continue to raise public awareness to protect consumers.

Do you think there are too many accreditation and regulations bodies in the lettings industry – isn’t it all to confusing for tenants and landlords?

I don’t think there is consumer confusion as to what organisations such as NALS stand for.

We offer overarching standards and protection which any agent who meets our strict compliance criteria can subscribe to.

As an organisation we are unique in that we offer a single, consumer badge encompassing agents who meet compliance requirements directly through NALS or through another trade association.

What do you feel is next for NALS and the Fair Fees Forum after the fees ban is introduced?

What’s next for NALS is to ensure that agents are supported through the transition process to a ‘no fee’ business model and in the aftermath.

We also want to ensure that tenants and landlords understand the implications of the new rental reality.

The Fair Fees Forum, established by NALS, comprising representatives from tenant, landlord and agent organisations, has worked collaboratively to inform government of the implications of the fee ban and there will still be work to be done post ban as the inevitable consequences play out.