Sign in or Sign up
The essential site for residential agents
Home » News » How much bigger are Purplebricks’ catchment areas than high street agents?
previous next

How much bigger are Purplebricks’ catchment areas than high street agents?

It's a question everyone in the industry as been mulling over - but now the data is out from agent comparison site GetAgent.

How important is local knowledge to vendors? It’s a question that hybrid agents such as YOPA and Purplebricks are putting under the spotlight right now as they attempt to claim ‘local experts’ with large patches.

But research just out suggests that local knowledge really is very important to vendors. So how local is local?

Agent comparison site GetAgent looked at national data from 14,000 branches and over a million listings to find out.

On average properties listed with traditional sales agents are 3km away from the high street branch they are listed with.

But it’s the stark difference in catchment area size that sticks out from the GetAGent research – Purplebricks LPEs operate within an average catchment size of 10km while traditional agents’ areas are no more than 3.8km wide.

“Being local is so important,” says Matthew Cousins of Surrey-based Inspire Estate Agents.

“I don’t understand how an estate agent can add value if they don’t know the area, the people and the properties.

“I know I can value a property accurately in the area I cover as I am likely to have sold a property very close by.”

It is also clear that Purplebricks take on twice as many listings than their traditional counterparts, so they must travel further between viewings and appraisals, and have more to visit every day. 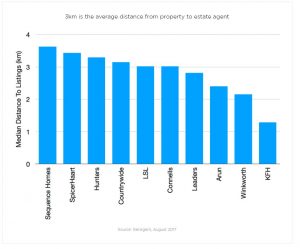 Of the high street branches, the agent with the shortest distance between branch and listings are KFH at one kilometre and Winkworth at 2.1 kilometres – suggesting they can claim to be the most ‘local’.

Sequence branches have the listings the furthest away for a traditional agent – at 3.5km.

GetAgent says corporates and independents take very different approaches to how large their patches are.

Companies such as Countrywide and LSL use data on the number of households and frequency of property sales to make their choices, while independents stick to areas they know well.

“What all the high street estate agents we spoke to have in common is that they see their local knowledge and their local database as a key factor to their success,” says GetAgent’s report.