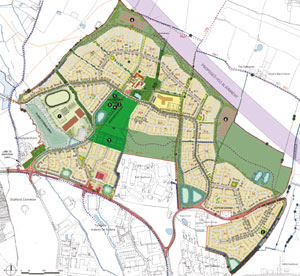 Worcestershire based developer Maximus has won planning permission for a major development that could provide up to 28 per cent of Stafford borough’s 2031 housing target.

The approved plans, approved by Stafford Borough Council, are for 2,000 homes built on 430 acres to the north of Stafford, with two new schools, a health centre, two local centres and a 60 bed care home at the heart of a new rural village.

The land, off Junction 14 of the M6 Motorway, is part of the Northern Urban Extension to Stafford.

Maximus Managing Director Jon Hickton said, “We are delighted and relieved that Stafford Borough Council’s planning committee recognised the merits of our scheme. We have been consulting with interested parties and key stakeholders since 2013 to ensure that our proposals were delivered in a comprehensive and sustainable manner. This development of 2,000 homes will go a long way to meeting Stafford Borough’s target of 7,200 homes by 2031.”