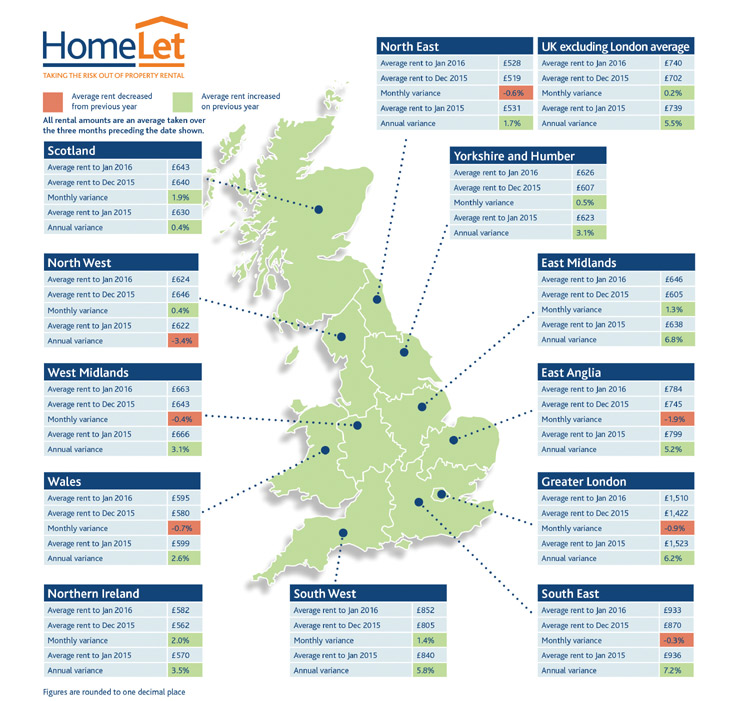 Private rents in London are rising at their slowest rate for two years, the HomeLet Rental Index reports, prompting questions over whether tenants are close to reaching an affordability ceiling in the capital.

The average new tenancy monthly rent in London signed over the three months to January 2016 was £1,510, HomeLet’s data shows, 6.2 per cent higher than in the same period 12 months ago; the slowest rate of rental inflation seen since March 2014.

Rents in other areas have increased more quickly. Across the South-East (excluding London), rents on new tenancies rose by 7.2 per cent over this period. In the East Midlands, rents rose by 6.8 per cent.

The slower rental inflation in the capital means the gap between the rate of increase in the capital and in the rest of the UK, where rent rises averaged 5.5 per cent over the three months, has narrowed to just 0.7 percentage points, the smallest gap since last April. In October, when London rents were rising at 7.5 per cent a year, this gap stood at four per cent.

This convergence between London and the rest of the UK may suggest that the much faster rental inflation seen in the capital in recent times has now begun to catch up with tenants and landlords. If rents are now towards the top end of what new tenants can afford, it is likely that rents in the capital could more closely track what landlords are charging elsewhere. Across the UK as a whole, however, the long-term imbalance between supply and demand in the private rentals sector has still to be resolved, and many tenants appear able and willing to pay higher rents.

The average rent on a new tenancy over the three months rose, on an annual basis, in 11 out of the 12 regions tracked by the HomeLet Rental Index – the exception being the North-West, where rents slipped by 3.4 per cent compared to the same period a year ago. As a result, outside of London, the typical new tenant now pays a rent of £740 a month for their rental property.