New report says that there is an annual housing shortage of 100,000 homes in England. 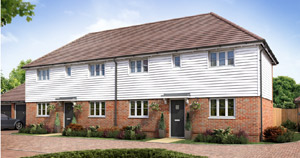 Private house builders could start building significantly more new homes in England if barriers to growth were cut, according to Savills.

A new report from the property firm makes various recommendations on ways that house building levels could be increased, with a view to reducing the ever growing supply-demand imbalance in the market.

The recommendations include increasing planning consents in high demand areas; boosting the supply of land; continued support for residential property developers and a rise in the building rate of local authorities and other bodies.

In spite of a rise in the volume of new housing starts in recent months, Savills reported that there still remains a major shortfall, owed in part to insufficient land available for residential development.

The report by Savills said there was the potential to construct 205,000 new homes per year, up 64,500 compared to the existing rate, if the supply of development land and planning consents increased in areas of high demand.

Analysis by Savills revealed that 2,020 local authorities have the potential to develop 35,000 new homes and housing associations can build 10,000 homes per year. The report also predicted that a further 10,000 new homes could be built if the Government supported companies which deliver build-to-rent properties.

Savills also said that access to funding needs to continue easing for SME house builders and it hopes that competition among lenders means that the range of choice will continue to grow.

The estate agency also pointed to the Government’s Help to Buy Equity Loan and NewBuy schemes, which supported 30,146 sales of new homes in England in the year to March 2015, as crucial in the battle to boost residential construction levels.

Savills estimate Help to Buy will support 30,000 new home sales per year and its estimate of potential delivery of residential properties by the private sector up to 2020 relies on its continuation.

‘If Help to Buy comes to an end after its current funding expires in 2020, we are likely to see start volumes tapering off up to two years before the end of the scheme in anticipation,’ the report says.