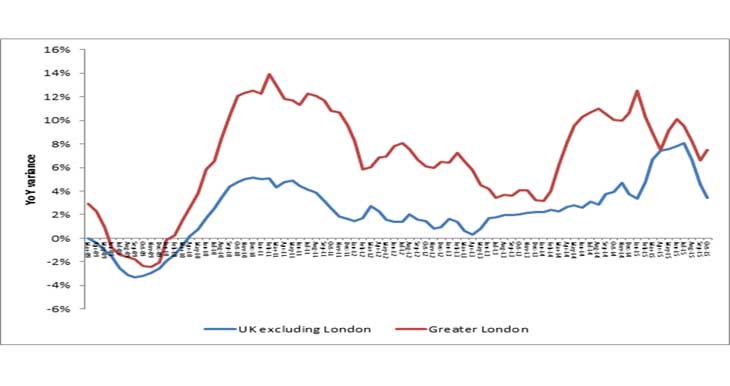 Private rental values continued to rise across the UK in October, albeit at a slower pace, led by gains in Scotland, the latest HomeLet rental index reveals.

The annual rate of growth in rental values for the UK, excluding London, has continued to slow since the July peak of 8.1 per cent, hitting an average of £749pcm in October – up 3.5 per cent compared with corresponding period last year
The widening supply-demand imbalance in the market is continuing to place upward pressure on rents, with nine of the 12 UK regions seeing rent prices rise on an annual basis in October, led by growth in Scotland at 9 per cent.

In contrast, rents fell by 4.9 per cent in the North West, were 2.2 per cent lower in Northern Ireland and dropped by 1.2 per cent in East Anglia.

The positive news is that almost nine out of 10 tenants surveyed said that they were happy with the standard of their current rented property; the majority of tenants insisted that they were content with the service provided by their landlord or letting agent.

The HomeLet survey also showed that many tenants ultimately aspire to own their own home, but that just over half of them are not actively saving for a deposit yet.

“Some 66 per cent of those questioned said that a deposit wasn’t affordable for them,” Totty added.