Belvoir has published its latest rental trends report which reveals a north-south divide during the final quarter of 2020. 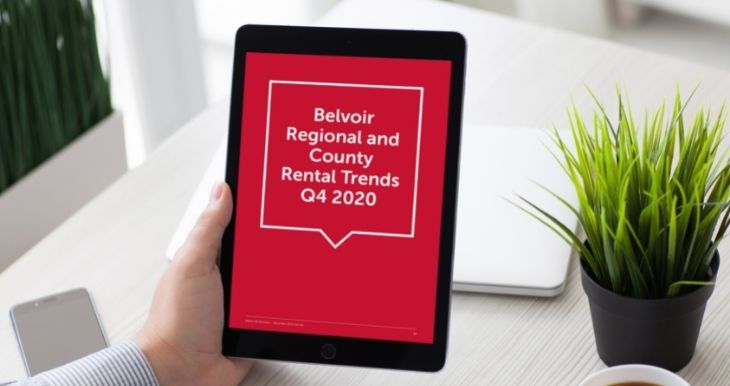 Belvoir’s Q4 rental trends report shines a spotlight on advertised rents in Covid-restricted Britain during the final quarter of 2020 and uncovers something of a north-south divide.

In-depth regional analysis revealed that many Belvoir offices in East Anglia, the North West and the East Midlands confirmed rental increases, with those in the South East and West seeing some decreases in house rents.

It’s not a complete north-south divide though, as franchisees in the West Midlands, Yorkshire and North East also reported a fall in rental prices while overall, rents had fallen 1% year on year.

“There was certainly some fluctuation in rents across the country in the final quarter of 2020, and this varied according to property type, availability and demand,” confirms Belvoir CEO, Dorian Gonsalves. “However, there is no doubt that tenant demand remained high throughout this period and Belvoir franchisees across the country are unanimously predicting further rent increases, with property shortages and tenant demand continuing unabated during the first quarter of 2021.”

Regionally, Belvoir offices recorded overall rent rises for London, with variations in different areas and property types. For example, Zain Mahal, owner of Belvoir Stratford, reported rents for flats had increased due to the uplift in demand for studios/one beds, but house rents had mainly remained unchanged. Tenant demand in Q4 was high overall for all property types, bar one bed flats.

Belvoir franchisees in Scotland reported an interesting and varied picture. Focusing on rents for three bed-detached houses in Q4, in Dundee the average rent was £700, compared to £1,300 in Edinburgh, £761 in Falkirk and £1,000 in Paisley.

When looking at rents for a three-bed detached house in Wales, Belvoir Cardiff & Pontypridd, and Belvoir Wrexham both saw advertised rents of £900. Tenant demand remained unchanged. Vaughan Schofield of Belvoir Wrexham reported that rents rose by approximately 5% as a result of a lack of available housing stock on the open market, with many properties being put up for sale.

“The Belvoir rental index is an invaluable free resource for landlords and investors who wish to research how rents are performing across the country,” added Dorian. “We have also provided information on tenant demand for different types of properties, and franchisee expectations on how rents are likely to perform across different regions in Q1 2021.”