Lettings specialist Belvoir says more renters are now opting to sign up to long term tenancies in a bid for housing security - but what does this mean for the market? 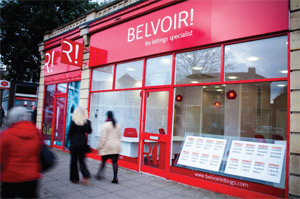 Long-term tenancies are definitely increasing, people are staying longer and longer,” says Jeremy Clarke, owner of Belvoir Christchurch in Dorset. “Our tenancy lengths have almost doubled. When we opened in 2004 people tended to stay in a property for 18 to 19 months, but my average now is 33 months. One of our tenants moved in February 2004.”

Proprietor of Belvoir Bury St Edmunds Patsy Day agrees, “We’ve definitely noticed a trend towards longer tenancies,” she says. “This was especially noticeable in January and February when we didn’t get the usual volume of notices from tenants looking to move on.”

The recession brought a change in attitudes towards owning property.

Belvoir Cheadle has experienced similar record tenancies, indicating a national trend towards long-term renting. “The tenancy lengths are quite long,” says owner Darragh Lee. “On average our tenants stay from 18 months to two years, but some have been in their home for five years; a few haven’t moved for nine years.”

North of the border, at Belvoir Aberdeen, Lewis Stuart reports similar experiences. “Most of our tenancies tend to run for two years or more, our longest dates from 2006,” he says. “Aberdeen has two universities and many tenants are students but we’ve noticed an increase in tenancy lengths in this sector too. Students are no longer moving on an annual basis, they’re staying longer at the same property.”

“There’s a combination of reasons,” says Jeremy. “Rents have gone up so people are more cautious about moving – many just can’t afford it. Some are saving for deposits, which takes longer now.

“There is also a lack of property available. If you were a tenant in this area you wouldn’t give notice for fear that you wouldn’t find an alternative. People will have a look and if there’s nothing there
then they’ll stay for another year.”

Patsy adds, “I think tenancy terms are increasing due to uncertainty, rising rents and changes in the market. There is a lot going on, some tenants are sitting back and just waiting to see what happens next.”

Darragh Lee also believes the economic climate had an impact on people’s moving preferences, “The recession brought a shift in attitude towards owning property. Some people have lost money on their properties which started a mental shift towards believing that home ownership isn’t the ‘be all and end all’ that it was.

“Owning your home is good if you’re paying the mortgage off, plus there’s room for capital growth. But, if you’re not and you have a large mortgage, the interest you’re paying is effectively ‘dead money’. Long-term rental is the perfect solution, giving stability without the disadvantages of the property being your responsibility.

“Also, we have older people becoming long-term tenants. They’ve downsized and are keeping hold of equity from their previous property but want the stability of a long-term home.”

“For a tenant, longterm tenancies give security and that is key for many tenants, especially those with children at local schools,” says Jeremy. “They can have big benefits for a landlord too – no void periods and rent paid every month. Also, a smaller turnover causes less wear and tear because furniture isn’t being moved in and out on a regular basis.”

Patsy agrees, “If someone lives in a place for a long while, they make it their home and they treat it like home. Often they will do any small fixes needed and treat the place as though it’s theirs, taking care of it.

“Another benefit is the reduced cost of repairs and maintenance. As a landlord you’re not having to paint it and replace carpets and do all the things you’d normally do at the end of a tenancy – because the tenant’s in situ they’re often happy to live with what they have.

“Furthermore, as the length of the tenancy increases the strength of the relationship between the tenant and landlord often gets stronger too, which is a huge benefit.”

“Tenants not serving notice in the same numbers as they were has a negative impact on stock levels as that ‘churn’ isn’t there,” says Patsy. “When tenants new to the market start looking for somewhere they’re finding it harder to find the right place, with many tenants queuing for properties.”

“We need more stock,” agrees Darragh. “If people aren’t moving then there’s not enough availability to satisfy the increasing demand. We’re always trying to find new landlords – we don’t have enough properties and neither do the other agents.”

Jeremy concludes, “Because of longer tenancies there are lower housing stock levels and it’s starving the market. Many new landlords are desperately needed and we’re actively seeking additional
properties.