The average rent in the UK rose by 1.1% in July compared to a year ago, HomeLet’s latest research shows, the first rise in three months. The average rent on a new tenancy signed in July was £925 according to July’s HomeLet Rental Index, compared to £915 in the same month of 2016.

The increase marks a return to rental price inflation after rents fell in May and June, the first such declines for eight years. However, the market remains significantly regionalised. Landlords in London continue to struggle to raise rents. The average rent agreed on a new tenancy in the capital was 0.6% lower in July than in the same month of last year, the fourth successive month in which rents fell. Rents in London remain significantly higher than elsewhere in the country, with average rents agreed in July at £1,564 a month.

Stripping the London market out of the data, the average rent in the UK climbed by 1.6% in July, with 9 out of 11 regions outside the capital recording rental price inflation. As a result, the average rent outside London now stands at £769, the highest figure ever recorded by the HomeLet Rental Index. The rental market’s bounce-back in July will be welcomed by landlords, who continue to face a difficult balancing act between the need to cover increasing costs and to remain conscious of tenant affordability. However, it is too early to say whether July’s turnaround is a seasonal effect or whether it will be sustained; the summer period very often sees rents climb higher, with increasing numbers of tenants on the move at this time of year.

In the longer term, demand for rental property looks set to continue to outstrip supply, particularly given warnings from the Residential Landlords Association in recent months that fewer landlords have been purchasing new buy-to-let properties. A similar effect has been seen in the housing market, where house prices stabilised in July as fewer sellers put their properties up for sale. 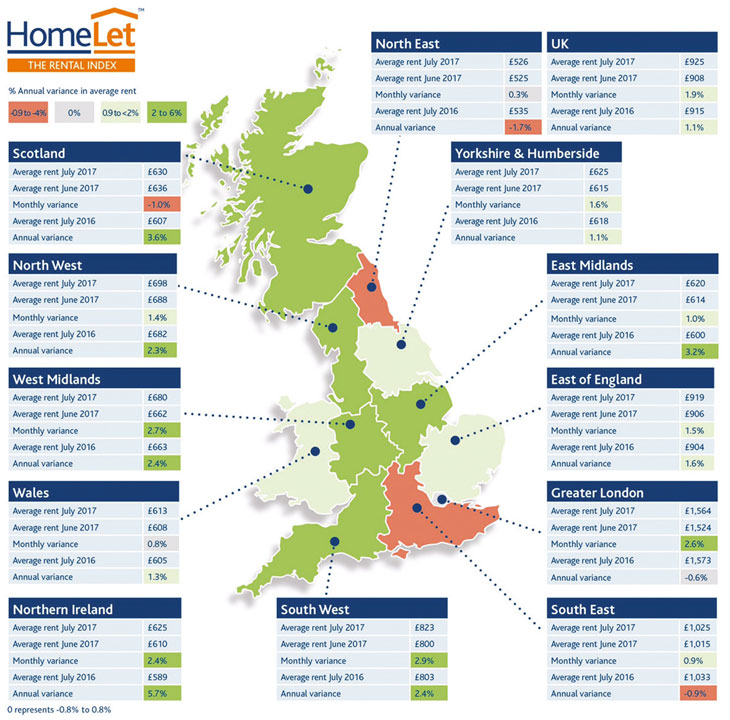