Rents creep up in August

The latest data from HomeLet shows that the average monthly rent now stands at £939, for tenants signing new tenancies in August, marking a return to levels of annual rental price inflation, not seen for almost a year. The HomeLet Rental Index also shows average UK rents rose by 2.4 per cent in August, the fastest rate since last November. The increase follows several flatter months – the annual rate of rental price inflation fell into negative territory in May and June before bouncing back to 1.1% in July, the first time in 2017 that rents rose at an annual rate above one per cent.

Rental price inflation in London contributed to the 2.4 per cent jump in August, with rents 2.5 per cent higher than in August 2016. The average tenancy is now £1,609. By contrast, rents in London were actually lower than a year previously in each of the past three months.

August’s inflation may reflect seasonal trends, with rents across the UK rising in this traditionally busy period for new tenancies. However, historical HomeLet Rental Index data shows the August increase this year was more marked than in previous summers, suggesting that while landlords have previously been anxious about tenant affordability, they are now beginning to feel they have no choice but to pass on higher costs.

Indeed, while the London market’s turnaround was especially significant last month, rental price inflation rose in 10 of the 11 remaining areas. Only South-East England bucked the trend, with rents down 0.2 per cent on August 2016.

This data suggests that PRS fundamentals may be beginning to reassert themselves. While landlords understand that tenants cannot afford to continue paying higher rents indefinitely, demand continues to outstrip supply. Tenants priced out of the housing market and demographic change are buoying demand, while the diminishing attractions of buy-to-let, due to rising costs, may be holding back supply. 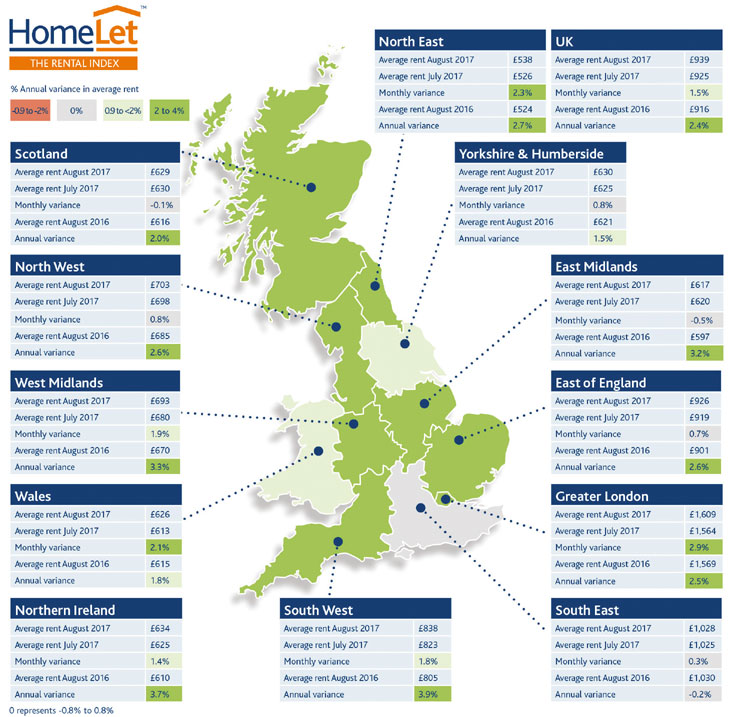