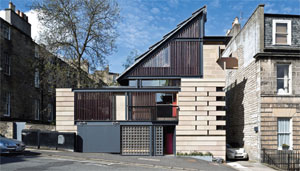 The RIBA House of the Year has been awarded to the best new house designed by the British architect Richard Murphy.

Making the award even more special for Richard, this is in fact his own house in Edinburgh. It is, says RIBA, “A delightful essay in architecture. It speaks to its context with direct references to the Georgian terraces, and with a clever change of scale that is at once deferential and powerfully striking in the street.

“It makes great use of a small site, creating a delightful private outdoor space on the first floor, with light brought in through the roof, and a seemingly endless number of surprising spaces.

“It is a house that responds to the Scottish climate, opening up to the summer sun and then shutting itself down to create a snug refuge in the depth of winter. Sliding doors pull out of walls and roof shutters drop into place transforming the house from a light-filled space open to the exterior terrace.

“It does all this with wit and style, in an architecture that Murphy has honed over the years to make distinct and personal.

“It feels an intense and personal space, playful and inventive, each corner revealing something new.

Full of references to his architectural heroes, Murphy has described his house as “a quarter Soane, a quarter Scarpa, a quarter eco-house and a quarter Wallace and Gromit, the latter referring to the various ingenious devices in the house.” 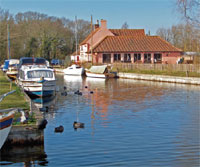 Knight Frank and Brown & Co have launched one of the most significant parts of the Norfolk Broads to the market at a guide price of £2.3million.

The Hickling Broad Estate is part of a world-renowned nature and conservation reserve, and spans about 654.73 acres, comprising extensive wetland, a let amenity and a commercial portfolio.

The Hickling Broad Estate presents a very rare and exciting investment opportunity. The Broad is designated as a National Nature Reserve (NNR), a Site of Special Scientific Interest (SSSI), and a Special Protection Area (SPA) as well as being a Ramsar site.

George Bramley, Partner at Knight Frank, said, “The owners have pursued a conservative and traditional policy of management, and have retained the charm which makes Hickling Broad such a unique place. I expect the estate to appeal to international and UK buyers, and generate interest from private individuals, the leisure and tourism industry and conservation bodies.”

Anne Barker, Partner at Brown & Co, said, “The estate has been in the same family ownership since the early 19th century. The scope to build on the leisure and tourism potential whilst enjoying the exceptional wildlife and conservation attributes make it a truly exciting prospect.”

The estate includes the focal point Broad area, spanning 588.69 acres of water, reed bed, wetland and marsh, grassland, fen and woodland and the let commercial portfolio, producing an income of £50,000 per year, along with a boatyard; thatched two-bedroom cottage; 16 boathouses; moorings; the Hickling Windsurfing Beach and four holiday lodges. 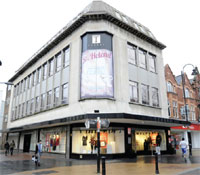 Merseyside based Luxor Group has purchased one of St Helens’ most iconic buildings, which once housed the independent department store Tyrers.

The developers have exciting plans for the five-storey building on Bridge Street, which include creating a sustainable mixed use scheme with housing and retail space.

Luxor Group will be investing over £1 million to renovate the building to a high standard and bring the empty building back in to use.

The exterior façade and features will be retained, with the developers revamping the rear of the building and adding decorative exterior lighting.

The 15,000 sq. ft. building will be converted in to a mixture of one and two-bedroom luxury apartments on the upper floors while the famous basement and ground floor retail space will be retained, with Luxor already looking in to potential retailers that could benefit the town centre.

The conversion of the building to create one and two-bedroom luxury apartments will aim to address the shortage of such accommodation in St Helens.

Paul Nicholson, Managing Director of Luxor Group says: “We are very proud to have an opportunity to save such an iconic building with so much heritage.

“Tyrers was an institution to the people of Merseyside and we are excited to bring the building back to life by creating functional living space and attracting a Grade A tenant for the retail space.” 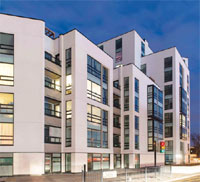 SDL Bigwood has won the management contract for new apartments at one of London’s most upmarket addresses.

The 205 Holland Park Avenue development by Redrow is in the Royal Borough of Kensington and Chelsea and offers a selection of two and three-bedroom homes, with prices up to £1.8m.

41 are for private ownership, nine are affordable apartments and commercial units make up the ground floor.

SDL Bigwood provides a full on-site management for all maintenance work, as well as a concierge service to residents.

Brett Williams, Executive Partner at SDL Bigwood, said, “We have worked alongside the team at Redrow for a number of years to help develop the service offered to residents, as well as the management plan, forming a close relationship with Redrow as a strategic business partner. It’s great to be in a position to now be able to put that management plan into action.

“205 Holland Park Avenue is exemplary on every level. This is a collection of exceptionally spacious homes in a striking building, with a number of high-tech innovations, including a vehicle turntable, CCTV and comfort cooling. The development also has its share of environmentally friendly provisions. As part of our team’s role, we’re responsible for the central heating system and making sure it runs efficiently to keep energy bills low.”

Kier Living has secured planning approval to build 150 new houses in Fryston, near Castleford. The new development, off Wheldon Road, is to offer a range of two, three, four and five bedroom homes adjacent to the River Aire and opposite the RSPB reserve at Fairburn Ings.

The former colliery site, where Fryston Hall once stood, was earmarked for development as part of the Castleford Growth Delivery Plan and was remediated for housing provisions by the Homes and Communities Agency. Kier Living subsequently acquired the site from Wakefield Council via the Delivery Partner Panel 2 framework which is designed to accelerate delivery of residential led development.

Since then Kier Livng has developed plans to provide an attractive scheme in keeping with the village environment.

David Mackintosh, Sales and Marketing Director, said, “We are delighted to receive planning approval for this development, which is designed to enhance the existing village with a range of well-presented family homes.

“Riverbank Meadows offers an attractive setting, on the banks of the river, with no through traffic and direct access to a wonderful area preserved for nature lovers and leisure pursuits.

PH Homes has submitted detailed plans for its latest project – creating an exclusive residential enclave in the beautiful grounds of Alderley Park, the former Cheshire headquarters of AstraZeneca.

Each of the house types has been created to complement the historic surroundings, with the original listed walled garden, arboretum, water garden and serpentine at the Park providing a spectacular backdrop.

Robert Adam aid, “We believe that we have created an outstanding scheme with an architecture that will do justice to these exceptional surroundings.”

Philip Hughes, Managing Director of PH Homes added, “Alderley Park is a truly stunning location with a rich history, and we can promise buyers that this will be an incredible place to live.”

Just 4 per cent of ‘affordable’ properties, (below the stamp duty threshold of £125,000 between January and September 2016) were new build homes, research by My Home Move has found – suggesting that the Government is falling short of its own targets.

Doug Crawford, CEO of My Home Move, said, “In its Autumn Statement the Government renewed its pledge to build more homes across the UK, with a particular emphasis on 40,000 additional ‘affordable’ homes. Our research shows that two in three people believe affordable housing should cost less than £120,000. The largest proportion of ‘affordable’ new homes have been built across Yorkshire, Greater Manchester and the West Midlands; however, in Berkshire, Herefordshire, Surrey and London, the picture is grim. Across the four regions only 1,544 properties were sold for less than £125,000, of which just 57, were newly built.”

My Home Move discovered that the majority of homes bought in the UK for less than £125,000 are terraced houses or flats. Durham, South Yorkshire and Merseyside had the highest proportion of ‘affordable’ homes sold during the survey period, accounting for on an average of one in two transactions.

Legal & General Investment Management Real Assets (LGIM Real Assets) has raised a further £170 million of equity investment from major institutions, including a significant commitment from a client of Aon Hewitt, for an open-ended Build to Rent (BTR) fund. The new fund will open up the rental market to long-term pension and institutional investors, and sits alongside £600 million of investment by Legal & General Capital and PGGM in 2016.

LGIM Real Assets’ total investment capability for BTR now stands at circa £1 billion. Since the launch of the LGIM Real Assets BTR platform, it has secured over a 1000 homes under construction or in planning within Bristol, Salford and Walthamstow, and has a pipeline of future projects, including Birmingham, Leeds and London.

Mike Barrie, Director of Fund Management said, “It is pleasing to attract such significant investment into our BTR platform. We have a housing crisis and only with institutional funding can we deliver the new homes the country needs. We have 1000 new homes either in planning or under construction.