Political machinations and Brexit still holding back buyers and restricting supply to market. 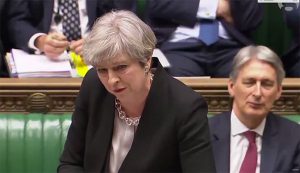 The flat sales market is set to continue as the number of properties for sale per branch hits a new low, says the Royal Institution of Chartered Surveyors (RICS).

According to its latest UK market report agreed sales, new buyer enquiries and new instructions have all dipped as domestic political uncertainty continues to impact the market.

Some 44% of RICS members who were surveyed said this was the reason for the lack of activity in the market, while 27% said Brexit was the most important contributing factor.

But London’s much more subdued market than the rest of the UK is blamed in equal measure on both Brexit and the recent Stamp Duty changes by the capital’s agents, RICS says.

“Perhaps not surprisingly in the current environment, the term ‘uncertainty’ is featuring more heavily in the feedback we are receiving from professionals working in the sector,” says Simon Rubinsohn, Chief Economist at RICS (pictured, left).

“This seems to be exerting itself on transaction levels which are flatlining and may continue to do so for a while particularly given ongoing challenge presented by the low level of stock on the market.

Looking ahead across the UK over the medium-term, agent confidence about the number of sales has dropped to its lowest level since the EU Referendum in June last year.

And 5% more of those polled by RICS said they saw a decline in the number of sales last month, the fourth consecutive month this has happened.

RICS says this reflects both a lack of stock coming on to the market and “a more cautious stance from buyers over recent months”.

“The latest results demonstrate the danger, however tempting, of talking about a single housing market across the country,” says Simon.

“RICS indicators particularly regarding the price trend are pointing towards an increasingly divergent picture.

“High end prime properties may be seeing prices slipping back but, for good or ill, prices are continuing to move higher in many other segments of the market.

“Indeed, the disaggregated data suggests that this will continue to be the case over the coming months.”

RICS also says that price growth has slowed, particularly in London where 45% of respondents reported a decline in house prices during June, while outside the capital the picture is very different.

Who should take on the job to lead Countrywide?

Following news yesterday that the industry giant is casting around for a new CEO, Andrew Stanton muses on what kind of person would take on such a challenging role.