Sign in or Sign up
The essential site for residential agents
Home » News » Agent spend on Rightmove tops £10,000 a year
previous next
Products & Services 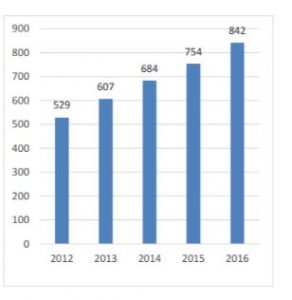 Profits at Rightmove jumped by 18% last year, the company’s final results published this morning reveal, helped by charging agents on average an extra £88 a month.

All the dials on the Rightmove ship twitched upwards including revenue, which increased by 15% to £220 million including £168.3 million from agents, £33.9 million from new homes developers and £17.8 million from other sources.

The report says the number of agents and developers advertising with the portal increased by 2% during 2016 to 20,121. It also highlights the listings gap between it and Zoopla, as Rightmove says it listed a million properties last year, a third more than ‘any other portal’.

“Rightmove continues to be the place that home movers turn to first, with nearly 1.5 billion visits in 2016, up 10% on last year,” says outgoing CEO Nick McKittrick (pictured).

“Home movers spent nearly a billion minutes every month searching and researching homes on Rightmove, the only place you can see almost the entire UK property market.

“Our continued innovation and audience growth is delivering even greater exposure for our customers’ brands and properties. We are adding further value through our data, advertising products and productivity tools and by building closer relationships with customers to support their ambitions.”