Shelter piles pressure on Rightmove to remove ‘No DSS’ adverts

Housing charity has launched a new campaign on Twitter to persuade Rightmove to change its stance on benefits discrimination within private rental market.

Shelter has launched a social media campaign to persuade Rightmove to join Zoopla and commit to banning ‘No DSS’ adverts within its listings.

Launched on Twitter yesterday (see below), the campaign targets Rightmove and asks the portal to ‘end discrimination’.

The housing charity has been leading a vocal name-and-shaming campaign against letting agents and landlords who refuse to consider potential tenants who in receipt of housing or other benefits, as well as putting pressure on the major portals not to carry the rental ads.

Polly Neate, chief executive of Shelter (left), told The Negotiator: “Rightmove is continuing to allow DSS discrimination on its site despite a wave of changes sweeping the lettings industry.

“Barring people from renting a home simply because they get a housing benefit top-up is prejudice plain and simple, and likely to be unlawful in many cases too. Rightmove are helping fuel misery for hundreds of thousands all over the country and adding to the number of people who cannot find a home.

“A host of household names including Zoopla, Co-op, NatWest and Nationwide have removed this discrimination from their policies and platforms, yet a couple of clicks on Rightmove’s website reveal pages of “No DSS’ adverts.

“The government has now joined our call for change, which is why we want Rightmove to take urgent action in response to mounting political and public pressure. The role of property portals in ending this discrimination cannot be underestimated.”

Last month Zoopla committed to ban adverts that use phrases such as ‘No DSS’ or ‘No Universal Credit’ in their property details by the end of this month. At the same time the government has led a campaign to ‘stamp out’ this kind of online and offline advertising. 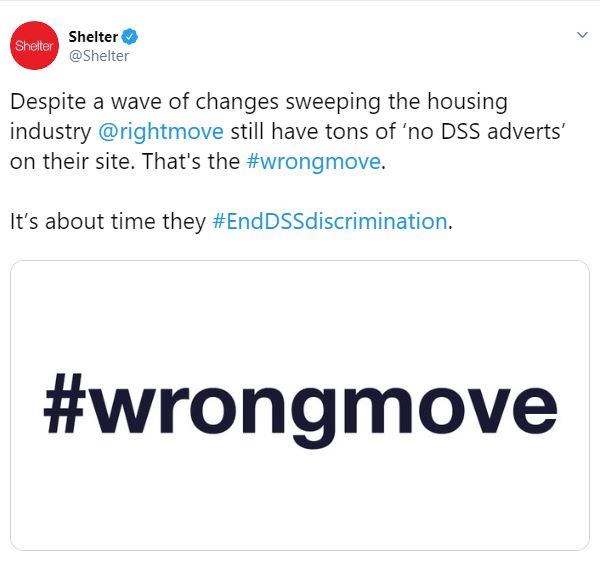 Unlike Zoopla, Rightmove has so far only called on the government to give greater guidance, blamed lenders for banning landlords from letting properties to benefit recipients, and issued guidance to its member letting agents.

But many within the property industry believe that initiatives such as Shelter’s will drive the problem underground and that both landlords and letting agents will instead use more subtle techniques to weed out benefit claimants.

Lawyer Joanne Young of Ashfords LLP recently wrote in a piece for The Negotiator, saying that: “Many private landlords in England are small-scale, their lettings portfolio may only comprise one or two properties.

“Letting is not their ‘business’ and they do not have the time, resources, or frankly the inclination to spend time chasing tenants (or the benefits agencies) about unpaid rent.”