Rising rents across the UK

UK Rents rose by more than two per cent during September, new HomeLet figures reveal. The average rent agreed on a new tenancy last month was £927 according to the HomeLet Rental Index, up 2.1per cent compared to September 2016.

Whilst the increase remains lower than UK inflation, it represents a continuation of the upward trend seen in the second half of the year. Average rents were higher last month than in September 2016 in every part of the country other than South-East England. In London, where rental inflation had been negative in four out of the five preceding months, rents on new tenancies were up 1.9 per cent on 2016.

Landlords are facing a deluge of higher costs from new regulation, taxation changes on buy-to-let mortgages and the prospect of a near-term rise in interest rates. There’s also uncertainty over the fall-out from the government’s intention to ban letting agents from charging up-front fees to tenants.

In the first half of the year, rental price inflation in most regions of the country either fell back or turned negative, perhaps as landlords and tenants adjusted to a raft of external announcements impacting the PRS. The more recent upward movement in rents across the country, evident since the summer, may be the beginning of a longer-term trend especially if tenants are left competing for fewer rental properties because some landlords decide the returns from property investment are being eroded by factors beyond their control.

Private landlords are collectively responsible for almost one in five of the UK’s housing stock, only time will tell but they may argue that increases in rents are inevitable when their own costs are increased and where demand for rental properties remains strong. It might therefore not be at all surprising to observe rents edging up again, it’s also striking that this seems to be a nationwide trend and therefore suggestive of some common factors. 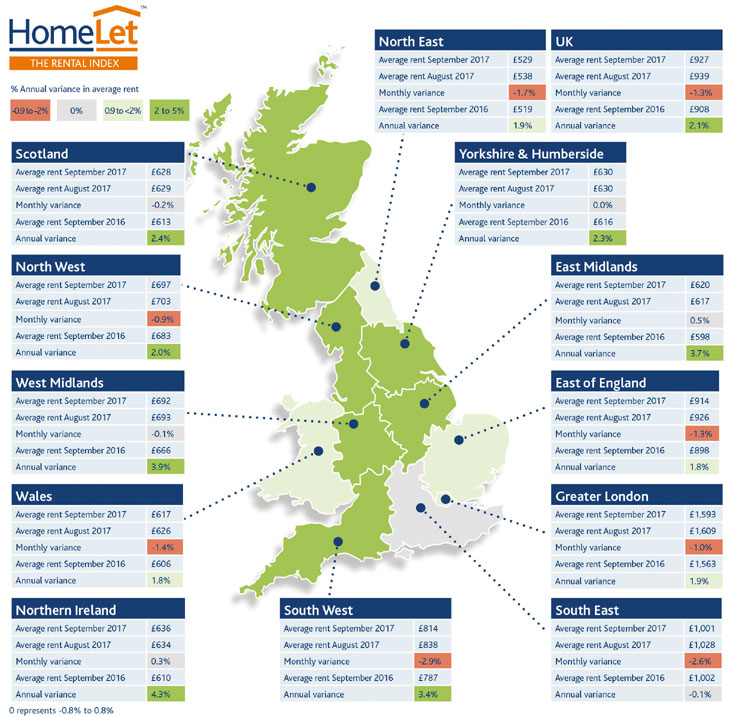