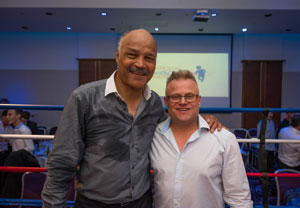 On Thursday 26th May 2016, ‘Rumble with the Agents’, the white collar charity boxing event held at The Holiday Inn Finchley Central in association with Landlord Action, raised £22,000 for Noah’s Ark Children’s Hospice. Noah’s Ark is a North London community based hospice, providing support for children and young people with life-limiting or life-threatening conditions, and their families.

On the night 12 property professionals from companies such as Winkworth, Kinleigh Folkard & Hayward, PRS and Auction House, all with little or no previous boxing experience, entered the world of white-collar boxing. Participants have followed a fully structured and supervised training programme since the start of the year in preparation for the fight night, which saw them cheered on by friends, family and colleagues in a safe and professional environment.

As well as the six fights, guests enjoyed a three-course meal followed by a raffle and charity auction, hosted by special guest and former world light-heavyweight boxing champion John Conteh (pictured with organiser Paul Shamplina of Landlord Action, above). The Negotiator is proud to be media sponsor of the event.

The signed sporting memorabilia was all highly sought after, with boxing fans out-bidding one another for a signed Anthony Joshua glove, which raised £1200 alone for the charity.

Alison Goodman, Director of Income Generation for Noah’s Ark Children’s Hospice, said on the night: “We are delighted to have been part of such a wonderful evening. Everyone here, or who donated, and all the boxers have made every precious moment count for Noah’s Ark Children’s Hospice by raising a fantastic £22,000. Thank you so very much on behalf of all our children, young people and their families. In particular, thank you to Paul (left) and Rita Shamplina who spent so much time and effort organising this amazing event.”

John Conteh added, “It is an honour to once again be invited to be part of this fantastic event, which not only gives individuals an opportunity to try their hand at a new and very challenging sport, but most importantly, raises an incredible amount of money for a wonderful charity.”