Sign in or Sign up
The essential site for residential agents
Home » News » Agencies & People » Knock me down! Charity boxing event raises record £19,000 for kids’ charity

The cash raised among the 300 guests, which is £3,000 more than last year, will enable eight critically-ill children to be granted their once-in-a-lifetime wish.

During the sell-out black-tie event at The Holiday Inn in Finchley diners watched ten boxers from various industry backgrounds slug it out over five fights of three rounds each, watched by family, friends and colleagues. 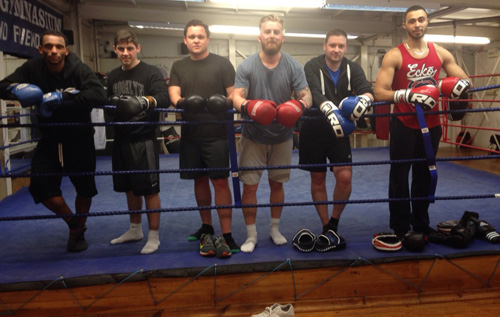 All of the boxers were complete or partial novices and were tutored by Shamplina in recent months at his boxing gym (right).

Shamplina, who two years ago sold his business Landlord Action to the insurance group Hamilton Fraser, also sourced all the sporting memorabilia raffled off during a live auction at the gathering.

“It was never my intention to launch an annual event, but every year it gets better, we raise more money and the quality of the boxing from the novices improves,” says Shamplina.

“This year, I really wanted everyone to be able to see the tangible results of the money donated and how make a different to those it goes to.

“Make-A-Wish UK is such a special charity and I hope by next year’s event we will be able to show everyone pictures of those eight magical wishes and what it means to the children who receive them.”

In 2018 the event raised £16,000 for a London cancer charity and Rumble with the Agents has now raised nearly £100,000 distributed among five good causes.

TPO expels three agents for non-payment of awards to landlords

Zoopla reveals biggest changes to its portal since launch in 2007