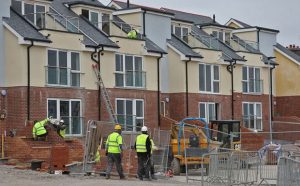 A new national homes building agency has been launched to get more new builds off the ground in the UK, it has been revealed.

Originally announced in the Autumn 2017 budget, the new agency is now up and running and busy on several fronts, including lending £45 million through the Home Building Fund to create 4,500 homes.

Yesterday Housing Secretary Sajid Javid (pictured, below) visited Alconbury in Cambridgeshire, where the government is helping fund 5,000 homes on the 1,420 acre site.

“This government is determined to build the homes our country needs and help more people get on the housing ladder. Homes England will be at the heart of leading this effort,” he said.

The agency will have new land buying powers and will focus on acquiring plots in areas where people want to live, support smaller and more innovative builders and bring more brownfield land on stream among the 16,000 unused sites recently identified by local authorities.

The new agency, which will replace the former Homes & Communities Agency, is a key plank in the government’s plans to build on average 300,000 homes a year by the mid-2020s.

Nick Walkley (pictured, right) will head up the new agency. He joined the HCA as Chief Executive in March 2017 and before that held several local government jobs including heading up both Haringey and Barnet London boroughs.

“As Homes England, we will use our land, finance and expertise to expand the delivery of affordable new homes and connect ambitious partners to remove barriers to house building,” says Nick.