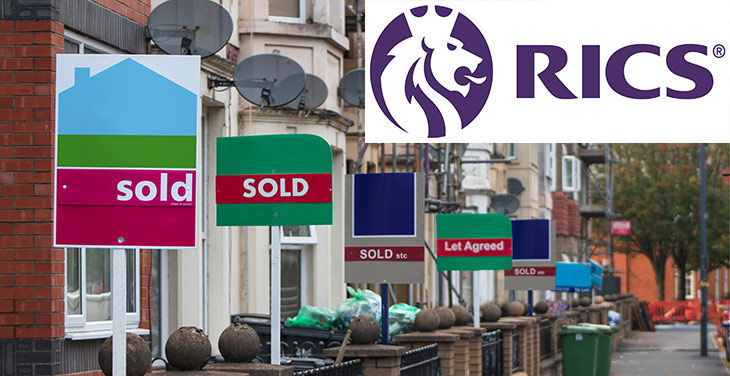 Sales of homes in the UK strengthened in February, thanks in part to renewed interest from new buyers – despite the Bank of England’s decision to increase interest rates.

The latest RICS Residential Market Survey recorded a net balance of +17% of respondents saying they had seen a jump in new buyer enquiries – the sixth time in a row an increase has been reported and the strongest it has been over this period. At the same time the number of agreed sales improved, with a net balance of +9% saying sales of homes were increasing and strongest reading since May 2021.

Declining new sales instructions coming onto the market also appeared to stabilise in February, with only -4% of respondents saying they had seen a fall (less than -7% in January). Stock levels remain close to historic lows however and are still a major factor in sustaining house price inflation.

Looking to the next three months, RICS predicts sales to increase, albeit at a more modest pace – with a net balance of +11% (down from +20% in January). Looking further ahead respondents remained positive with sales expected to remain on a upward trajectory over the coming year.

On the lettings front, demand from tenants seeking rental housing grew at a solid rate with a net balance of +55% of contributors noting an increase in February. Twelve-month rental growth projections now stand at 4.5%, while respondents anticipate rents increasing by an average of 5% per annum over the next five years.

Commenting on the figures, Simon Rubinsohn (right), RICS Chief Economist, said, “Huge clouds of uncertainty hang over the economic prospects as energy prices continue to surge and the Bank of England grapples with how to manage monetary policy in this challenging environment.

“Despite all of this, there is little evidence yet that the mood music regarding the expectations for house prices or rents is shifting. Indeed, the medium-term projections from respondents to the RICS survey are continuing to gain momentum.”

Commenting on the RICS report, Tom Bill, Head of UK residential research at Knight Frank, said, “We are presumably witnessing the final few months of double-digit house price growth before supply picks up and demand begins to fray around the edges.

UK house prices have been skewed by a lack of supply in recent months but the shelves are gradually re-stocking, a process accelerated by the arrival of spring. Meanwhile, higher inflation and rising mortgage rates will begin to put the brakes on sky-high demand. It won’t happen overnight but I would expect the return of single-digit house price growth later this year.

While the Bank of England may adopt a more risk-averse approach to raising the base rate given the geopolitical uncertainty, mortgage rates are still playing catch-up and lenders are likely to keep withdrawing their best products.”

The full report can be read here.