Savills and easyProperty battle it out this Sunday…on TV

Both estate agents are to screen their latest ads for the first time during the same show on ITV at 8pm.

Two opposing giants of the property industry are due to do battle this weekend, but not in the place you might imagine.

The pinstripe suits at Savills are to take on the online orange-ness of easyProperty at 8pm on Sunday during ITV historical drama Victoria (pictured, right) during which the two agents will be screening their new adverts.

Savills is expected to be first with its new campaign called A Savills Love Story which, the agent says, will build “on the successful concept of talking houses which featured in the Savills campaign last year, this year’s theme goes a step further in bringing homes, and our deep attachment to them, to life”.

The company admits both versions of its new TV advert – one shot on a beach (being aired on Sunday) and the other in a park – are fairly surreal, each showing a couple ‘meeting’ their current and future homes and discussing their forthcoming move. 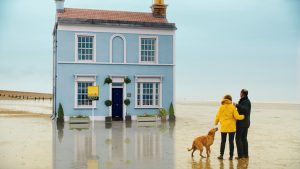 “Savills is a business which prides itself on its hunger, drive, and agility in a changing market. The 2017 campaign was a success and has given us the confidence to press forward,” says Alison Dean, head of consumer marketing at Savills.

“We want to challenge perceived perceptions of Savills, and to demonstrate the role we play in the emotionally turbulent business of moving home.”

EasyProperty, which is also launching a multi-media campaign including TV, radio, print outdoors and online after its re-launch this week as a rival to Purplebricks following its merger with the Guild of Property Professionals, is also revealing its TV ad during the ITV drama.

The ad, which The Negotiator has seen ahead of its airing on Sunday, explains how easyProperty now works and heavily eggs the latest addition to its business model – local property professionals.

The 30-second ad, which will also be available to watch online on Monday, follows a young couple and explains how they sold they home through easyProperty and how it’s “a piece of cake”.

Jon Cooke, Chief Executive of easyProperty, told The Negotiator the local property professional featured in the advert was an actor, not the real thing, but that next time it “should be”. Any Guild agents out there with acting pretensions, now is the time to call him!