Savills Auctions has revealed that it has hosted an August auction for the first time in the company’s history, yet another indicator of the extremely unusual Covid market conditions following the home-moving re-start in June.

The company normally hosts eight auctions a year at posh hotels in central London but has been holding its auctions ‘virtually’ during Covid and, after being swamped by lots for its July even, decided to make the unprecedented move to hold one in August too.

During this auction it sold 51 lots raising over £20 million. Despite there being a fall in value of residential property sold at auction across the whole market, Savills has now sold over £154 million of property during 2020, which is over 35% more than the same period in 2019.

Savills virtual auctions during Covid have been strange affairs, and have been held at its London offices with an auction podium and gavel-basher (pictured), two negotiators taking phone bids but otherwise everything else done online.

Christopher Coleman-Smith (left), head of Savills Auctions team says, “Going into our first ever August auction we hoped it would be a success but couldn’t be certain due to a lack of precedent.

“With circumstances meaning lots of people couldn’t travel we hoped we would be able to capture bidders who may otherwise have been abroad. “We were delighted with the results of the sale. From bidders, we saw strong demand for houses in central London and the surrounds. There was also competitive bidding for several commercial lots.

Like many other auctioneers, Savills says it has seen an increase in buyers looking to purchase homes at its auctions, as well as the usual investment property bidders.

Savills’ next auction will be in September. 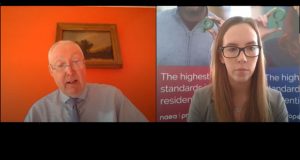