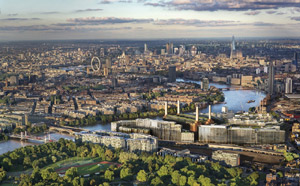 Labour’s plans to close down what they call a loophole for the super-rich, by scrapping non-dom tax status in this country, would be a terrible mistake as it could have an adverse impact on the housing market in the capital, along with many other sectors, according to a leading estate agent.

Nicholas Leeming (left), Chairman of national estate agents Jackson-Stops & Staff, which has 44 offices nationwide, believes that Labour Leader, Ed Miliband, is intent on “closing down London to international business” if he abolishes the non-dom tax status.

Mr Leeming argues that Labour’s policy will effectively deter many wealthy foreigners from buying property in this country, particularly in the capital.

He said, “The Labour party is out to target the wealth creators in this country and will effectively close down London to international businesses and investors if it continues to punish this sector. We have created a world-class city and we want to continue to encourage people to buy homes here and invest in the capital. The move to scrap the non-dom tax status will impact on every aspect of life in the capital – jobs, the property market, shops, restaurants and businesses. London needs to remain open for business.”

Of the 116,000 people registered as non-domiciled individuals with HM Revenue and Customs, just 5,000 pay the annual levy that allows them to benefit from privileged non-dom tax status, and yet there are signs that Labour’s proposal is already starting to have a negative impact on the capital’s housing market.

“Trevor Abrahmson of Glentree added, “Independent august financial institutions have estimated that the non-dom facility earns the UK about £2billion worth of revenue which is why Gordon Brown (our esteemed former labour Chancellor) and his successor Alistair Darling were very reluctant to abandon this rich source of benefit for the UK.”

London-based estate agents Douglas & Gordon reports that a number of property deals in the capital have fallen through since Labour’s announcement regarding their plans for non-doms last week, while there has been a rise in valuation instructions from foreign homeowners in the city, suggesting that many are making tentative plans to flee the UK should Labour win the General Election on 7th May.

Ed Mead (right), Executive Director of Douglas & Gordon, told the press, “These people [non-doms] spend a lot of money in the economy. I do very much fear for the top end of the market.

“The London market is unique – it’s pulled from the top up. If you cut strings that are holding the market up, everything else falls down.”