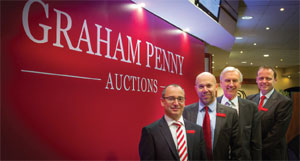 Shepherd Direct Limited (SDL) Group has acquired the East Midlands based Graham Penny Auctions as part of its strategy to create a new national brand.

It is the second acquisition for the Chilwell-based firm has made following the purchase of Birmingham based CPBigwood auction house in January.

The group’s turnover has also trebled in two years from £19million to £60million – and could continue to rise as it plans further expansion.

As part of the Graham Penny deal, shareholder and Co-Founder James Cockayne will retire, while John Fearnehough and Graham Penny will continue with consultants.

The business will be run by Managing Director Andrew Parker, who will report to CPBigwood CEO Rory Daly. In 2015, CPBigwood sold more than £77million worth of property across six auctions, up by £15million on 2014. Graham Penny Auctions, meanwhile, raised more than £72million last year.

“SDL is a fast-paced, successful growing property services group which has more than quadrupled its turnover in the last five years and remains extremely ambitious,” said Paul Gratton, Chief Executive of the SDL Group.

He added, “When we acquired CPBigwood we said we were intending to build on the existing strengths of the business – auctions and property management.

“This is the first of a number of acquisitions we have in the pipeline and under consideration, and gives us a real auction powerhouse across the UK.”