Sellers warned to beware of agents who list homes on OTM 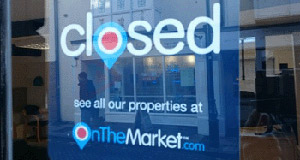 Homeowners who want to sell their properties could miss out on potential buyers, as thousands of estate agents continue to stop listing homes on either Rightmove or Zoopla, as a result of OnTheMarket.com’s (OTM) ‘one other portal’ rule requiring their member agents to stop advertising on either website, Zoopla has warned.

Various agents have in recent weeks stopped listing properties with Rightmove, but it is Zoopla that has been most affected by the new OnTheMarket website, with a larger share of agents opting to cancel their subscriptions to Zoopla, in accordance with OnTheMarket.com’s strategy.

Ian Springett (left), Chief Executive of OnTheMarket.com, in a press conference recently, said that OnTheMarket “want to keep growing” and get to the “number two position” in the portals market “as quickly as possible” and at the expense of Zoopla.

But by preventing their member agents’ from listing homes on both Rightmove and Zoopla, which between them get more than 100 million hits a month, Zoopla argues that OTM is restricting consumer choice and the potential market reach of those vendors and landlords trying to find buyers or tenants for their properties.

Lawrence Hall (right) of Zoopla said, “Marketing a property as widely as possible is an essential part of getting the best price. Most property searches are now conducted online, so being on all the UK’s main property portals is something that sellers today simply take for granted. That all changed last month (with the launch of OTM) and any seller using an agent who restricts marketing is going to get less interest in their property as a result.

“Most agents [three in four] don’t do this but sellers now need to beware of those who do limit marketing exposure. The single most important question a seller should now ask a prospective agent is where they will be marketing their property to ensure they are on all the big portals like Zoopla, Rightmove and PrimeLocation.”

Rightmove claims that it recorded its busiest ever month as visits from home hunters hit 100 million for first time in January, an uplift of 12 per cent on January 2014, amid rumours that the website is planning to increase subscription rates for agents over the next couple of months.

Page views, which are the best indicator of activity on the site, surpassed 1.5 billion for the first time ever, meaning property hunters are getting through over 1,000 pages every two seconds.

Email and phone enquiries by home hunters to agents on Rightmove hit 4.3 million for the first time, equating to around 100 enquiries every minute.

Miles Shipside (left), Rightmove’s Commercial Director commented, “The initial flurry by home hunters on Rightmove during the first half of the month has been sustained and surpassed, with such strong demand putting paid to any talk of pre-election delays by home hunters for the time being. This increased demand and record traffic spells good news for those sellers who have marketed their property early in the year, especially ones with quality homes in popular locations.”