Compulsory Purchase Orders, which may now affect homeowners and landlord investors who bought ex-local authority homes – and PRS tenants – amounts to a form of ‘social cleansing’ forcing the poor and ethnic minorities out of the Capital. 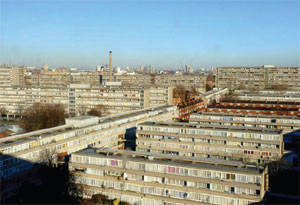 The political thinking around CPOs shifted dramatically in 2016. In the London mayoral race, candidates Zac Goldsmith and new Mayor Sadiq Khan agreed that CPOs should be used to acquire brownfield sites for the construction of 50,000 new homes per year in the capital.

The upshot is that all council estates have now been classified as ‘Brownfield Estates’ and are eligible targets for CPOs.

Communities Secretary Sajid Javid’s recent decision to deny permission for a CPO on the Aylesbury estate in south London – on the grounds that it would breach the residents’ human rights – represents a victory for leaseholders. However, 40 other ex-council estates in London are currently fighting CPOs, many others have already been forcibly bought.

This strategy amounts to a form of social cleansing; by definition, ex-council estates are likely to be over-representative of poor and ethnic minorities. Using CPOs to forcibly acquire these estates disadvantages marginalised groups, who will not benefit from the regeneration because they will no longer be able to afford to live there.

Councils have a legal obligation to ensure that a flat owner is in a ‘no better or worse financial situation’ after a CPO.

The official reason for the use of CPOs is that local authorities want to turn run-down ‘sink’ estates into new homes for social tenants and leaseholders. The real reason is money.

Firstly, the councils will get money from developers who want to construct new luxury flats to a mostly investor market. Secondly, as a result of regeneration, the area becomes more desirable to live in, allowing the local authority to raise council tax.

The primary concern for flat owners is the amount of money they will be offered by councils, compared to what the property is actually worth.

Councils have a legal obligation to ensure that a flat owner is in ‘a no better or worse financial situation’ after a CPO.

However, in practice councils tend to make their first offer of compensation lower than the market value to shock flat owners and set their expectations. For example, data obtained by campaigners at the Aylesbury estate via a Freedom of Information request found that Southwark council paid £147,500 for a four-bedroom maisonette.

Considering that the estate is just two miles from Westminster and a flat on the nearby Camberwell Fields development was valued at £459,000, the price offered by the council was clearly far too low.

There is then a real human cost to such unfair compensation. Many leaseholders will be unable to buy a like-for-like property on the new development and too old to get a mortgage to buy another flat in their area.  They will be faced with using their capital for rent until it is used up or moving miles away.

Those young enough to get a mortgage will be in a similar position, unable to afford to buy near their friends and extended families. This causes real issues for families and communities, and it is widely documented that people in these situations suffer from depression or mental health issues due to losing the support of their friends and families.

If leaseholders are unhappy with the valuation offered they can take their case to the Upper Tribunal (Lands Chamber) but the cost of valuers, solicitors and barristers is very daunting to leaseholders. Also the councils, who get all their fees paid for by the tax payer, are almost certain to appeal if they don’t get the desired decision, thus wiping out a huge portion of the compensation received by a leaseholder, win or lose.

Residents can submit a Freedom of Information request to the local authority to see if their block is being considered as a possible CPO target. There can be lots of rumours around the fact but it is simple to find out the truth. If flat owners’ properties are targeted for a CPO they shouldn’t despair!

The council has to jump through a lot of hoops to get the permission required to forcibly take possession of their homes.

Flat owners that act as a group to fight the proposal will stand the best possible chance of opposing the CPO. Residents should research what other estates have done to successfully fight CPOs, as well as contacting their MP to explain the true human cost of the process.