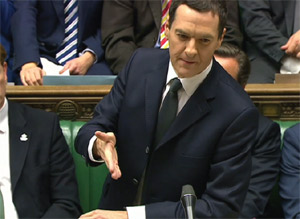 Every buyer, seller and estate agent in the land would have liked to see Stamp Duty abolished but we all knew that wouldn’t happen.

However, George Osborne, The Chancellor of the Exchequer, dealt a masterstroke to the Opposition party with his dramatic – and immediate – Stamp Duty reform. Thousands of pounds saved in Stamp Duty payments – for 98 per cent of all homebuyers – will give potential buyers a real impetus to move.

It’s another way of clobbering the rich to butter up Middle England voters.”

This was a carefully constructed bomb among a whole salvo of missiles aimed at the Labour Party’s election campaign. It will certainly catch the votes of most estate agents when it comes to the crunch next May. Vote-catching aside, this was a brave – and clever – way of reforming tax which removes the need for a Mansion Tax, while the wealthy (those able to afford more than £937,000 for a home) can console themselves that it is a one-off payment on purchase, rather than an additional annual tax.

Changes in a nutshell

Old regime: Stamp Duty applies to all properties over £125,000. It was calculated in bands and even if the property was sold at £1 over the previous band, the whole percentage of tax was due on the whole of the purchase price – known as a slab system.

New regime: Stamp Duty remains payable on all properties sold for over £125,000 but now buyers will only pay the rate of tax on the part of the property price within each tax band – like income tax.

The Chancellor knows that he will never please everyone, so he opted to risk the wrath of his wealthy chums – and their estate agents. Ed Tryon, Director of Lichfields, complains that the rich will be ‘clobbered.’

“George Osborne’s changes will be politically popular, however, this is unbelievably damaging to the top end of the prime London market and I am staggered over this increase in the rate,” said Ed, “It will penalise those looking to buy over the £1.5 million and give little incentive for people to purchase over that level. This is another way of clobbering the rich in an attempt to butter up Middle England voters.”

David Pollock, Managing Director at Greene & Co., was more positive, “This will have a short term negative effect on the upper market prices. However, those already in a £2m property will have to balance moving and paying extra stamp duty with staying where they are and risking mansion tax coming in next year.”

Nick Leeming, Chairman, Jackson-Stops & Staff, took a similar view, “This rate of 12 per cent on properties above £5 million will penalise the London market and hit the country house market. However, we welcome the changes on stamp duty at the first-time buyer end of the market as this will help to stimulate activity at that level.”

Gideon Sumption of Stacks Property Search says, “We welcome the reforms. An antiquated system has been reorganised in a much fairer way.

“The biggest difference is that this system is effectively discretionary rather than mandatory. Mansion Tax would have penalised those who already lived in properties worth over £2m. The new system only affects those who choose to buy.

“Congratulations, Mr Osborne, for shooting the running fox that was the shockingly unfair spectre of the Mansion Tax.”

Jeremy Leaf, from Jeremy Leaf and Co. says that sellers won’t now be forced to discount prices to attract buyers, “This practice was particularly common for sellers in the £240-£270k price range or developers wanting to charge a few thousand pounds more for a larger plot, garage or a better view. The thresholds distorted the market resulting in buyers and sellers trying to avoid the extra duty often by dubious means.

“It will also be interesting to see whether transactions rise sufficiently to help make up for the apparent £730m shortfall the Treasury are likely to forfeit as a direct result of the stamp duty reductions.”

Peter Rollings, CEO of Marsh & Parsons, said, “The abolition of the archaic slab system will take the sting out of the tail for thousands of buyers on the lower rungs of the ladder.

“This new graduated system should help brighten the UK housing recovery in regions outside of London, where property prices are still battling back to pre-recession levels – but it will add to the weight of the tax burden shouldered by those buying more expensive homes.”

Liz Peace, Chief Executive of the British Property Federation, added, “We are pleased to see other reliefs remain, such as for multiple dwellings, which is very important to the build-to-rent investment sector. “

Jeremy Blackburn, Head of Policy at RICS said, “Time and time again RICS has called for these changes, which now mean 98 per of homebuyers will benefit. These changes reduce distortion and ensure those at the top end of the market contribute fairly, while those at the bottom are given a fairer chance to get on the ladder.”

You can download the Government’s Guide
to the new Stamp Duty regime:
https://www.gov.uk/government/uploads/
system/uploads/attachment_data/
file/382324/Stamp_Duty_15.pdf