Andrew Hill, who opened for business as an estate agent in October, has now launched a national online lettings service in competition with OpenRent and Upad.

The market for online-only lettings agents has a new player but it’s not one of the usual suspects.

The company, which is based in the central Belgrave area of the city and also offers an Airbnb-copycat short-term lettings platform, has launched an OpenRent-style service that enables landlords to upload their properties to OnTheMarket, with listings on Zoopla and Rightmove due later.

Harry Albert charges £49 for a listing that will last up to six months, the same price as OpenRent’s paid-for three-month service and less expensive than Upad’s Standard £120 service.

“We decided to launch after we saw larger agents routinely breaking the rules, [so] our intention was to operate nationally but being a small company, we felt we were punching above our weight slightly which is why we’ve opted to cover a smaller area for our other services beyond advertise only,” says Managing Director Andrew Hill (pictured, above).

“This allows us to provide a more comprehensive and more personal service to our clients.”

Andrew also says he hopes to use his national ‘advertise only’ reach to expand out of Leicester and Nottingham into the West Midlands and East Anglia by 2020 before heading north.

Like its larger digital rivals, Harry Albert charges extra for anything more than its ‘advertise only’ service, including writing the listing, handling enquiries, referencing and viewings.

The company also offers a let-only service that includes viewings and referencing for £249, plus a full-service traditional model that charges 10% of a property’s annual rental income.

Andrew has some way to go with his business – OpenRent claims to be the largest UK lettings agency by listings and has over a million users including tenants and landlords, while Upad has over 12,500 registered landlords.

“Our first client for ‘advertise only’ has properties in [the] Solihull, Birmingham area – we’re in the process of listing that property at the moment which should be live within the 24 hours,” says Andrew. 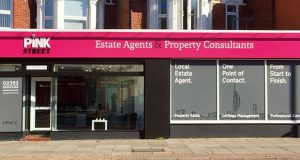