Stress in the PRS

11,000 tenant evictions in three months – will the problems for landlords and tenants worsen in 2015, asks Paul Shamplina of Landlord Action. 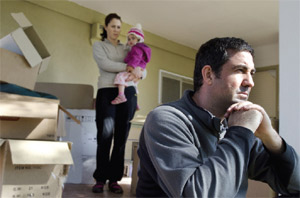 The number of tenants being evicted by their landlords is at a record high with bailiffs repossessing more than 11,000 rented properties in the three months leading up to September 2014 (Ministry of Justice) – the highest quarterly figure since 2000.

Most tenants have already reached their ceiling of affordability.”

Landlord Action, one of country’s leading services in dealing with problem tenants, has never been busier, resulting in the necessary expansion of its legal department. Naturally, this upward trend coincides with the rise in the number of tenants throughout Britain, but Paul Shamplina, Founder of Landlord Action, predicts that possession cases will rise by as much as 15 per cent this year. Paul says:

The result of the 2015 election is key to the future of the Private Rented Sector (PRS). If Labour wins they may introduce policies that would have a major impact on the market. They include possible rent controls, which crippled the PRS in the 70s and a ban on letting agent administration fees.

However, my greatest fear for 2015 is for social housing tenants and Universal Credit. The Government is accelerating its delivery of the Universal Credit system, which rolls six benefits and tax credits into one, with the aim to tackle welfare dependency. There has already been a sharp decline in the number of landlords offering homes to claimants and reports suggesting more tenants are struggling as a result of the cuts. As the scheme rolls out, fewer landlords will feel confident to rent to this sector, especially in the South East, amid fears of increasing rent defaults because of direct payment to tenants, creating an even greater gap between supply and demand.

Although the private member’s bill to address so-called “retaliatory evictions” – where tenants who complain about the state of their property are then issued with an eviction notice – failed to pass through the House of Commons in November, the debate continues with similar measures appearing in a proposed amendment to the ‘Deregulation Bill’, which returns to the House of Lords in mid-January.
These include:

We need clear evidence of the extent of the problem before further action, (yet more legislation), is put in place. To put this into context, a recent survey of landlords that had instructed Landlord Action to serve Section 21 notices revealed that only 2 per cent had served a section 21 because the tenant had asked for repairs.

I made it clear in the evidence I provided to the cross-party parliamentary group that the proposed Bill would fail and I believe that far more rogue landlords need to be prosecuted, named and shamed by councils.

Although UK interest rates are likely to remain at their current record lows for some months, the base rate has been static at 0.5 per cent for over five years and inevitably rates will have to rise, more than likely towards the end of the year or early next year.

Most tenants have already met their ceiling of affordability and would struggle to absorb any increases imposed by landlords looking to cover a rise. It could also mean some landlords choose to exit the buy-to-let market putting further pressure on the housing shortage.

Since we have become a regulated ABS, our workload has dramatically increased and we are constantly striving for speedier evictions for our landlords. However, Government spending cuts, a growing number of possession cases and the enforcement by some courts that bailiffs must no longer act alone, have combined to create serious delays in the eviction process.

We recently had an eviction with a bailiff at Bromley Crown Court who had 14 evictions that morning. Our greatest challenges lie in obtaining faster eviction dates from County Courts and the reluctance of judges to grant leave to landlords to transfer their case up to the High Court, and use a High Court Sheriff instead of waiting for a County Court Bailiff. Landlord Action is working on a campaign to address this problem.

The buy-to-let market will continue to grow as more young people continue to rely on rented homes. Government and local authorities need to work together to loosen planning restrictions on rented property and maximise the supply of good private rented homes, especially in larger cities. I am still concerned that there are too many varying licensing laws adopted across the different councils.

The greatest challenge is the engagement with landlords, tenants and agents; getting each to understand their rights within a rental contract and their obligations in renting out a professionally managed and safe property. Hopefully, the Government will throw further resource at promoting their ‘How to Rent’ guide so that landlords and tenants understand their responsibilities.