When a water bill for £1500 landed on a tenant’s doormat, trouble began. The Property Ombudsman, Rebecca Marsh, adjudicates. 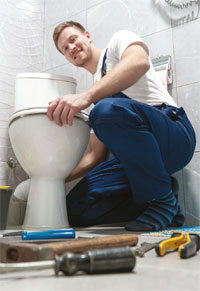 A case that The Property Ombudsman (TPO) was asked to review came from a landlord concerning the agent’s management of repair and maintenance issues at the property, particularly in relation to reports of a leaking toilet.

The 2019 editions of the TPO Code of Practice were considered. For this case, the focus was on the following aspects of the Code:

The landlord said that she was not made aware of any issues at the property until she received the tenants’ letter of complaint. The letter cited the tenant’s dissatisfaction over a very high water bill and also that they had repeatedly made the agent aware that the toilet was constantly leaking. They said that Thames Water suggested this was the cause of the excessive bill.

The landlord was unhappy with the agent’s perceived mismanagement of the repair.

The agent responded saying that they instructed a contractor to complete the necessary works and that they could not be held liable for their actions beyond that point. They claimed the contractor held all necessary qualifications and offered to provide these details to the landlord in order for her to make a claim against them.

TPO considered the agent’s service in dealing with the issue throughout the period in question.

From the evidence provided, TPO found that not only was the agent not sufficiently proactive when arranging necessary works, but that they had been aware that the same leak issue had occurred for previous tenants. Notes relating to the previous tenancy stated that repair work was carried out on the toilet, but that it was only a temporary repair.

TPO was satisfied that the toilet was not leaking at the start of the tenancy in question, as it was not identified during the check-in. The leaking toilet was then highlighted during a subsequent inspection, but the agent did not notify their maintenance department for a week. A contractor was appointed, but it then took a further seven weeks for the repair work to be completed. During this time, the tenant received a water bill of nearly £1,500.

TPO was satisfied that the toilet was not leaking at the start of the tenancy in question, as it was not identified during the check-in.

Following the repair, the agent wrote to the tenants asking for confirmation that all work had been completed. The tenants responded by highlighting an outstanding issue with a window, adding nothing further about the toilet. It was therefore reasonable for the agent to assume that the toilet leak had been resolved.

TPO was critical of the agent for not highlighting the initial temporary repair and then for not being sufficiently proactive in attempting to facilitate the repair appointment and advising the tenant of the requirement to physically grant access for the contractor. Although the agent was not responsible for the contractor’s poor communication, there were failings in the agent’s communication at various points throughout the tenancy.

TPO supported the complaint and awarded £400 in compensation.

As always, communication is the key. Although an agent is not responsible for the actions of a contractor, the responsibility to proactively ensure all relevant parties were aware of what is required to resolve repair issues remains. This means that contractors, tenants and landlords must be clear about what the issue is, when the issue is to be resolved and what is expected of each party to enable that to happen. Thereafter, repair issues should be followed up to ensure they have been resolved and the result communicated to landlords and tenants.