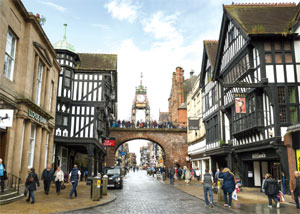 Delegates at MIPIM 2016 in March can’t have failed to notice the sizeable British presence at this year’s exhibition in southern France, with plenty of cities and local authorities from across the UK exhibiting at this famous international property event.

Cities in the north of England were well represented, attracting plenty of attention from delegates, in light of the UK Government’s ambitious plans to create an economic counterweight to London in the form of a ‘Northern Powerhouse’, to unlock the region’s economic potential.

But while core cities like Manchester and Liverpool attracted significant interest, you may be forgiven for thinking that smaller northern cities might have been ignored.

Not so. Chester Growth Partnership, which made its debut at the event this year, shone at the property convention, as it promoted Chester to the world as a brilliant and welcoming place for enterprise with a view to attracting fresh inward investment to the city.

Guy Butler, Chairman of Chester Growth Partnership, said, “We worked with Cheshire West and Chester Council to create an investment map to showcase the long established financial services hub here, but also companies which have more recently moved here, such as Bristol Myers Squibb and Tetra Pak. With the arrival of One City Place by Chester railway station we’ve taken the first step in the creation of a new business district in the city centre. There is much more to come in Chester.”

Chester has a positive story to tell, not to mention £700 million-worth investment opportunities for investors and developers. It’s named as the UK’s best place to live in the latest UK Hot Housing Index, compiled by location specialists CACI, which takes into account places that offer good value for money, local employment levels, internet connectivity, school provision and local amenities.

The CACI survey said, “It sits in a very affluent part of the country and is relatively close to larger cities, such as Liverpool, also boosting its appeal as a commuter destination for young professionals.

“These affluent, young individuals are particularly drawn to the quality of the retail and leisure offer within Chester, which scores very highly on the level of amenities and high levels of employment.”

Chester Growth Partnership will deliver a programme of improvements in Chester as part of the One City Plan, a 15-year strategy which guides the future economic regeneration of Chester.

The aim is to create a reinvigorated city centre, making it a distinctive and desirable place in which to live, invest, do business, visit and study.

A series of developments are underway, including the £300 million city centre Northgate Development – 400,000 sq ft of new retail, leisure and residential – and £100 million Central Business Quarter, which will contribute significantly to the 500,000 sq ft of grade A office space that the city is set to offer by 2028.

Sally Pilott, a property lawyer at DTM Legal and a member of the Chester Growth Partnership, said, “Everyone can see solid progress being delivered in Chester. There’s much more to come that will help ensure the city remains an attractive place to live and work.”

Chester will also benefit from the launch of the Northern Gateway Development Zone, a partnership scheme designed to spearhead economic growth, including the creation of 120,000 jobs and 100,000 new homes in North Staffordshire and Cheshire over the next 25 years.

Among the many residential-led developments under construction in and around Chester, Redrow Homes is developing Farndon Meadow in Farndon, which offers large houses, with prices from £424,995, while David Wilson Homes is building a terraced houses at Wepre Green in Connah’s Quay on the outskirts – prices from £168,495.

Churchill Retirement Living is building 33 retirement apartments in Hoole Lane, while Sanctuary Maintenance recently completed a £1.3 million project in Lache consisting of a 13 homes for rent and shared ownership.

Cheshire-based Gladman Developments is proposing a new development of 520 homes in Melton, while Redrow Homes is looking for suitable sites to deliver the first new homes in the city centre in a decade.

Nick Desmond, Managing Director of Bride Hall Real Estate Partners, said, “It’s great to see that Chester has a new focus. There is strong interest from the occupier market in the redevelopment of Chester. The end game is about more jobs and making Chester an even better place to live and work.”

When Rightmove asked people to rate where they live on community, appearance and price, as part of its ‘Find your happy’ national marketing campaign last year, the survey of 24,000 people declared Chester the fifth happiest place to live in the UK and the happiest place to reside in the North West.

With a population of 120,622, Chester retains its unique character whilst offering everything that you’d expect in a modern city. Jordan Halstead, Jordan & Halstead.

Jordan Halstead, Managing Director, Jordan & Halstead, says, “With a population of 120,622, 17,000 of which are students, Chester has managed to retain its unique character whilst offering everything that you would expect from a modern city.

“Much of the Roman influence remains and Chester’s city walls are the most complete in Britain, but there is also a vibrant nightlife, superb shopping on old streets and new designer outlets and innumerable restaurants and entertainment venues.”

No wonder then, that Chester is a property hotspot, with demand for housing rising faster than anywhere else in the UK, according to the latest quarterly survey by eMoov, which shows a 164 per cent jump in demand year-on-year.

That demand is managed by no fewer than 70 estate agencies and lettings businesses, says Jordan, “We manage 600 properties in the city of Chester and the surrounding villages. The average void
period is just five days and the average tenancy runs for 22 months.

“Our business was established in 1992, so we have served the Chester priority market and local community for almost 25 years. J&H is one of the largest property management and lettings business in Chester. We are also estate agents, however 85 per cent of our revenue is generated from lettings.”

House prices have been rising steadily, “Since Christmas, the supply of new properties to the market has started to fall below demand. As a result we have been achieving much stronger prices,” said Thomas Leech, Senior Branch Manager at Swetenhams in Chester.

Thomas reports that the city centre is a very popular place to buy property, but with uncertainties around the EU referendum, interest rates and the economy, the supply of properties looks set to drop further. “This means that those properties that do come to market will continue to achieve stronger prices and in much shorter timescales,” he added.

In the prime Chester market, including Curzon Park and Handbridge, overlooking the river and racecourse, homes command prices of over £1 million, as illustrated by the £1.5 million recently achieved for a Georgian residence at Sandown Terrace on the banks of the River Dee, sold on behalf of the Founder of Moneysupermarket, Simon Nixon. Houses such as these are given the largest media attention, but the main market is family homes.

Jamie Carter at Strutt & Parker Chester, noted, “Chester is experiencing resurgence in buyers of family homes. Families are in search of good schooling, big houses and a city with character and history. Chester ticks all of these boxes! It is beginning to emerge as the fashionable city it was 15 years ago, thanks to the return of these new money buyers. There is evidence of growth as we, along with other North West cities and towns, try to catch up with 2007 prices.”

In the past year, the price of a home in Chester has risen by an average of 4 per cent, a mere fraction of the 364 per cent growth recorded in the CH36 area of Chester over the past 20 years, where the average price of a home has appreciated from £58,000 to £269,000, the latest Land Registry figures show.

Families are in search of good schooling, big houses and a city with character and history. Chester ticks all those boxes! Jamie Carter, Strutt & Parker.

60 per cent of buyers in Chester are relocating here from within Cheshire, according to Jamie Carter. “The city location means that people are closer to amenities whilst being surrounded by meandering rivers, green parks and there are more restaurants than you can count,” he added. “Many commute to Manchester and Liverpool, while travel time to London Euston is little over two hours.”

Sandown Terrace: elegance on the riverside.

Notable hotspots within the city are the “eternally popular” Queens Park and Curzon Park, according to Savills Chester Director Charlie Kannreuther. He also highlighted Hoole, an affluent suburb in the east of Chester and Dee Hills Park as areas attracting greater attention from buyers “because of the Waitrose effect.”

Up and coming villages such as Christleton, Rowton and Waverton in the suburbs are also proving popular with buyers at the moment due to their proximity to the city. Charlie said, “Demand for quality property in Chester has certainly grown strongly over the last two years.”

With so much focus on the initiatives that fall under the Northern Powerhouse scheme on the core northern cities, many of the smaller cities in the region look set to lose out, but it’s clear that Chester is a hotspot and will not be overlooked in plans for the scheme. 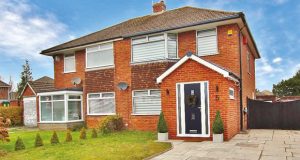 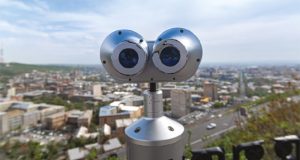